Argentine pope: A reflection of Catholicism ‘south of the equator’

Residents of Buenos Aires met the papal announcement with surprise, checking smartphones in the street and asking each other if the news was true.

See the PDF
1
1
As news spread that the Catholic Church’s most powerful position had gone to a non-European for the first time in more than 1,000 years residents of Argentina’s capital were scrambling to double check their smartphones – and asking each other if the news was really true. 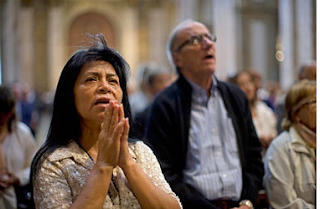 Local media outlets had largely dismissed the idea of Jorge Mario Bergoglio, the Archbishop of Buenos Aires, as a papal front-runner, largely because he had lost out to Pope Benedict XVI in 2005 and was an older-than-average 76. Speculation rested, instead, on a possible Italian, Canadian, or even Brazilian candidate.

But as it was confirmed that Latin America – where 40 percent of the globe’s Catholics reside – had produced its first pope, crowds quickly began to swell outside Buenos Aires’ cathedral in the city’s main square. The young crowd shouted that they were “the pope’s youth,” waving the yellow and white colors of the papacy alongside Argentine national flags and pictures of the Virgin Mary. At one point, revelers burst into a rendition of the national anthem, and others repeatedly chanted “Francisco,” or Francis, the adopted name of the new pontiff.

“Demographics are south of the equator, not north anymore,” says Mr. Matovina. “This choice resonates with where church growth is happening.”

The selection of a Latin American pope has important significance for the entire global south, not just Argentina and Latin America. One-fifth of Africa’s population identified as Catholic in 2009, and 12 percent of the church’s followers reside in Asia, according to the Pew Research Center’s most recent data.

‘So excited’
Ruben Franco from Maracaibo, Venezuela, was in Buenos Aires last night after making a pilgrimage from the city of Rosario, some 185 miles northwest of the capital.

“We’re so excited to be here, because this is such a great day,” says Mr. Franco. “We just finished our pilgrimage yesterday and now this. I can’t believe it.”

Argentines were quick to welcome the idea of having a native pope – an Internet poll conducted by news channel Todo Noticias showed that 90 percent of respondents viewed the appointment positively. Some 85 percent of those surveyed hadn’t expected an Argentine pope, according to a separate opinion poll by Infobae.

‘Energy of the region’
Bergoglio, a Jesuit and the son of Italian immigrants, became a Buenos Aires bishop in 1992 and archbishop in 1998. He built a reputation for working in some of the city’s poorest villas, or shantytowns, especially around the Flores neighborhood where he grew up. A longtime fan of Argentina soccer club San Lorenzo, the new pope is also respected for his lack of pretence and humbleness: He’s reported to take public transportation to work and live in a modest apartment.

Pope Francis is his chosen name, perhaps inspired by Francis of Assisi, founder of the Franciscan Order, or St. Francis Xavier, an early Jesuit. The name is laced with symbolism, says Jonathan Seitz, a specialist in religious history at Drexel University in Philadelphia.

Francis symbolizes renovation, Dr. Seitz says. “He thought the church needed fixing and clearly this is part of Bergoglio’s agenda. It fits with where he comes from geographically and what he seems to have carried out through his work in Argentina.”

Bergoglio is considered conservative in his beliefs, walking the traditional church line on issues like same-sex marriage and contraception. His focus on the poor is renowned, with the church leader asking Argentines not to fly to Rome in 2001 when he was appointed cardinal, and to, instead, donate the money they would have spent on plane tickets and lodging on the poor, reports Reuters.

José María Cullen, who came straight from work to the cathedral by bike when he heard the news last night, says he approves of Bergoglio’s choice in names. “[Francis] is a saint dear to the hearts of Argentines and many people throughout the world.”

“The pope is sending a strong message and perhaps giving an idea of where the church’s priorities should lie,” Seitz adds.

The church has faced numerous challenges in recent years, from charges of sexual abuse to a shrinking number of followers, particularly in Europe.

Bergoglio’s appointment will “feed on the energy of the region,” says Seitz. Brazil has the world’s largest Catholic population followed by Mexico. Argentina is considered one of the region’s most secular countries, though close to 80 percent of the population identifies as Catholic.

Catholicism in Latin America is facing challenges as well, though, due to secularization and the spread of evangelical and Pentecostal faiths, says Matovina. In Central American countries like Guatemala and El Salvador Protestants make up more than 35 percent of the population.

“Will those challenges turn around [with a Latin American pope]? This will have an effect, but those are pastoral challenges that must be met on the ground. But this pope could give additional motivation and inspiration to address” those shifts in demographics, Matovina says.

“I think people will rejoin the church due to this,” says Angél Saretta a Catholic writer and philosopher based in Buenos Aires. “We’re culturally secular [in Argentina] but still a religious society.”

Controversy
Bergoglio hasn’t been afraid to speak his mind in the past, occasionally clashing with the mayor of Buenos Aires Mauricio Macri and President Cristina Fernández de Kirchner and her predecessor and husband Nestor Kirchner as a result. In September 2011, for example, Bergoglio famously gave a mass in which he referred to the city as “una ciudad coimera” (an easily bribed, or bent, city). The president congratulated him via Twitter last night, nevertheless, and in a public speech said she hoped he could form a “union between countries.”

For now, the main controversy stems form a decades-old black-and-white photo of Bergoglio giving communion to then de facto President Jorge Rafael Videla during Argentina’s military dictatorship in the 1970s. Critics say the photo suggests that as a member of the Jesuit hierarchy, he turned a blind eye to human rights abuses of Argentina’s so-called Dirty War, something he has denied.

Mr. Saretta says this is a difficult issue. “Many people worked in the dictatorship and the church did what it had to do,” he says. “It couldn’t have declared a war against the junta.”

The overriding feeling in Argentina, however, is one of pride, as the people outside the Cathedral were keen to demonstrate.

Brian Beresovsky was thrilled to join the celebration, despite being Jewish. “We’re a very small country,” he says. “So to suddenly have the whole world talking about Argentina is a historic moment.”

The cardinals involved in the conclave were certainly aware of the precedent-setting decision they were making by choosing an Argentine pope, says Matovina. “But will we have another pope of this background next time? Part of the choice of this man has to do with the qualities he brings to the leadership as a whole,” including his ability to speak fluent Italian, an important aspect for someone who as pope is considered the bishop of Rome.

“Most of the electors were Europeans and … they were confident and hopeful he could lead the whole church in the way it needs to be led at this moment.”