Aspen might be known for its spectacular skiing but it’s also home to an architectural legacy left by a gifted Bauhaus master.

“Everything is deferential to the mountains,” says Lissa Ballinger, the art curator at the Aspen Institute. She’s pointing out the effortless way that this think-tank’s low-rise, white-roofed buildings accentuate the dramatic sweep of the Rockies beyond them. It’s a function-first architectural approach that is classic Bauhaus, yet the setting for it is an unlikely one. Better known as a ski destination for America’s wealthy and well-connected, Aspen is a former silver mining town that was transformed after the Second World War as recreational skiing took off.

Change was driven by a vision of cultural utopia in the mountains, fomented by Chicago industrialist and Bauhaus enthusiast Walter Paepcke. He bankrolled the town’s development, setting up both the Aspen Institute and the Aspen Skiing Company. And his plans for drawing the world’s best thinkers through ambitious architecture were almost entirely executed by Austrian Herbert Bayer. Both a student and teacher at the Bauhaus art and design school in Weimar, Germany, Bayer had settled in the US after fleeing the Nazi regime. 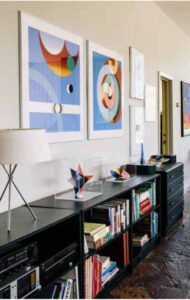 “This campus is Bayer’s gesamtkunstwerk – a total work of art,” says Ballinger. “Everything is considered: the light in the rooms, the exteriors, the shapes, the integration of outdoor and indoor, the sculptures.” Lesser known than other Bauhaus luminaries such as Ludwig Mies van der Rohe (the school’s last director before it was forced to break up in 1933) and founder Walter Gropius, Bayer is widely regarded as a Bauhaus purist who closely followed its principles until his death in 1985. And, as the Bauhaus celebrates its centennial this year, Bayer’s work – which spanned architecture, art and graphic design – is finally receiving the attention it deserves.

“The Bayer legacy separates Aspen from other mining towns-turned-ski resorts,” says Lisa Hancock, curator at the Aspen Historical Society, currently showing an exhibition of Bayer’s graphic design that covers everything from music-festival posters to skiing promotions via hotel logos. Indeed, while other nearby resorts such as Vail have embraced Swiss-style Alpine kitsch, Aspen has clung to its modernist architectural heritage.

The most enduring Bayer legacy is undoubtedly the Aspen Institute campus, which also includes now-independent spinoffs, such as the Aspen Center for Physics and the Benedict Music Tent, which hosts a world-renowned annual summer music series. With its impeccably landscaped lawns designed by Bayer, as well as several Bauhaus-inspired artworks, the grounds continue to feel like an other-worldly utopia.

Guiding us around the campus is silverhaired architect Harry Teague. We tour the buildings that Bayer designed (he didn’t become a licensed architect until 1965 and often worked in tandem with his brother-in-law Fritz Benedict, who had apprenticed under Frank Lloyd Wright) and Teague points out classic Bauhaus features. These include geometrically shaped rooms that encourage group discussion, clerestory windows and Bayer’s quirk for continuing doorways all the way to the ceiling. At the 1957 Resnick-Malek Health Center, with its colour-block “HC” mural on the outside, a now-defunct spiral staircase once led to a sundeck (shut after Americans started worrying about skin cancer, we’re told). Nearby the 1953 Koch Seminar Building – the first property built on site – features hexagonal seminar rooms and an outdoor sgraffito artwork: a flowing mural of undulating contour lines that draws on a technique pioneered by Bauhaus artist Wassily Kandinsky.

If anyone has inherited Aspen’s Bauhaus legacy, it’s Teague. The architect is behind the campus’s newer buildings, including the Harris Concert Hall and a new Center for Physics building. In 2000 he helped erect the latest iteration of the Benedict Music Tent, the third version of the music venue that was originally designed by Eero Saarinen in 1949 and then redone by Bayer and Benedict.

Although Aspen’s primary Bauhaus legacy is institutional, look hard enough and you’ll find residences here too. Most recently Teague worked on a house for the family of Bauhaus photographer Ferenc Berko. Teague incorporated his wood-panelled studio into a new family home complete with a Bayer blue front door (named after the shade of baby blue that Bayer doggedly encouraged Aspen residents to paint their houses). But there are plenty of older references too. Beyond the quirky turret-like fences that Bayer constructed outside several Victorian properties (no one is entirely sure why), several modernist homes have survived, even if they’ve been tweaked and enlarged over the years to sate Aspen’s booming property market.

One such home has been owned by the same family since 1960 and was designed in 1947 by Egbert Jacobson before Bayer (who also briefly lived in the house) added what is today’s master bedroom. “All you see from the street is the garage door,” one family member says with a smile. Inside, though, it’s beautifully preserved and has panoramic mountain views from the large back windows. The main living-space walls are adorned with the colourful geometric shapes that are a hallmark of Bayer’s artwork. The room is decked out with Herman Miller chairs and there is a single painted feature wall that Bayer did himself.

Not far from this residence is a wooden home that was clearly conceived in a ski-lodge style. Its owner, Gail Block, proudly informs us that it is the first modernist home declared historic in Aspen and “can’t be torn down”. It was designed by Bayer in 1963 and features quirky ski paraphernalia in the hallway. Block explains its appeal: “It’s extremely efficient and utilitarian; form follows function as opposed to ornament first.”

In a town where home sizes and prices are constantly spiralling, Bayer’s Bauhaus opus – both residential and institutional – harks back to a moment when architects truly contemplated how spaces would be used and where quality trumped quantity. Quite simply, says Block, “Bayer was ahead of his time.”

Bauhaus – tracing its legacy:
Germany’s Bauhaus lasted from 1919 to 1933 in three different Weimar Republic locations. Fusing craft and fine art, the school’s principles shifted during its lifespan from expressionist utopianism to socially orientated design, to finally being more of a traditional architecture school. Bauhaus designers conceived everything from flat-roofed buildings to sans-serif fonts – Herbert Bayer invented a universal typeface while at the school – and today their influence can be felt as far afield as Israel, Nigeria and Russia.

Bayer fled Nazi Germany in 1938; after a stint in New York he moved to Aspen in 1946. As the town developed its ski industry, Bayer was charged with helping to promote it. He moved away in 1975 but left a legacy of graphic design, urbanism and modernist buildings. His snowflake-inside-a-leaf logo is still in wide use; a Bayer-inspired version can be seen on the carpet of the airport.