What’s on the menu?

Travis Ekmark and Alvin Diec, co-founders of design studio Family Brothers, are sitting at a meeting table in their Atlanta office explaining how they joined forces. “We annoyed each other less than we annoyed our other co-conspirators,” says Ekmark, joking about the time they spent sharing a workspace as freelancers. As one of the office cats surveys proceedings from its vantage point on the table, Diec adds that his relationship with Ekmark may have been cemented by a shared love of energy drinks.

Self-deprecating and endowed with a dry sense of humour, both seem almost uncomfortable when it comes to self-promotion. And yet, since its creation in 2012, there’s little doubt that the studio of seven has established a name for itself in the world of savvy, often wryly amus­ing food-and-drink branding and graphic design. Now based in the low-rise and leafy – and aptly named – neighbourhood of Cabbagetown, Family Brothers has worked on brand identities for a slew of bars, restau­rants and hotels – encompassing web design, outdoor signage, merchandise, coasters and menus – not just in its home state of Georgia but also in the likes of Maine, Utah, Tennessee and Montana. The firm recently landed its first overseas gig with Big Mamma hospitality group, working in Lille and then London. “People just email us sometimes,” says Diec, shrugging off the prestige of its latest commission. 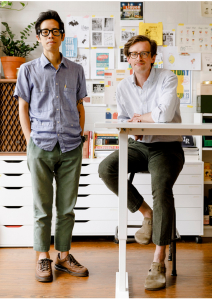 Atlanta might not have the same concentration of US design talent as coastal titans Los Angeles and New York but the city does offer a number of advantages beyond the chance to be a bigger fish in a smaller pond. First, having the busiest airport in the US on your doorstep means that direct flights to visit clients are always avail­able. Second, being based in one of the country’s fastest-growing metro­politan areas means that new places to grab a bite to eat or sup a cock­tail are constantly springing up. That said, Diec admits that the studio didn’t initially plan to focus on F&B. Family Brothers’ inception, however, happened to coincide with a boom in independent restaurants as the farm-to-table movement got into full swing – when “food became ‘a thing’”, says Diec. Everything snowballed from there.

A few kilometres down the road, res­taurateur Michael Lennox explains the appeal of working with Family Brothers. Lennox says that the firm’s work is as good as anything else he’s seen in the US, adding that the com­pany’s sense of humour was immedi­ately more appealing than the service he might have received from a studio that takes itself too seriously. Lennox’s debut restaurant Ladybird launched in 2014 and he is the proprietor of two other spots that opened in Atlanta three years later, both inside a former train depot from the 1920s. The first, Muchacho, is a counter restaurant with a 1970s southern-Californian feel – conveyed by three-tone rainbow-swirl branding – that specialises in breakfast tacos. Next door is the retro Highland-lodge-meets-cocktail bar Golden Eagle. Family Brothers has helped with the branding for all three projects and has been involved with Muchacho and Golden Eagle from the beginning.

Lennox admits that he had strong ideas for the newest ventures before meeting up with Diec and Ekmark. For Golden Eagle he’d been inspired by an old soft-drink bottle he’d picked up at a flea market years earlier; having discovered that the trademark had lapsed he decided to incorpo­rate the design into its logo. “A lot of people would be turned off by a client saying, ‘I’ve already got the logo,’” he says. “But Family Brothers expanded the idea and turned it into a complete brand.”

Lennox says that the Family Brothers duo “have a really sharp eye in terms of detail and digging up things from the past”. Diec and Ekmark agree that they enjoy the deep-dive of each project. “If there is an aesthetic it comes out of trying to be genuinely curious about research,” says Ekmark.

Often that can mean a hearty embrace of Americana. At Golden Eagle there’s a mid-century feel to the illustrations and selected texts (also supplied by the studio) that feature a smirking cigarette-smoking man in a suit next to an outsized martini glass and the words, “Beefsteak Martini: we think it goes down well with a steak”. Creating a character linked to the history of a building (or concept) in order to tell a brand story is an inte­gral part of Family Brothers’ work. As always, humour is at the fore.

A sense of fun is clearly evident in the studio’s work for Hotel Clermont in the Poncey-Highland neighbour­hood of Atlanta: beautiful match­books at reception, for instance, are emblazoned with the slogan, “These matches were stolen from the Clermont Hotel”. The studio decided to embrace the building’s louche past rather than shy away from it; there is still a strip club in the base­ment (which is not part of the hotel). The menus in the Clermont’s Tiny Lou’s restaurant – another Family Brothers character, inspired by a dancer from the 1950s who is part of Atlanta folklore – inform diners that they are seated “above where the ladies dance”, while an illustration of an upside-down pair of crossed legs appears on the do-not-disturb signs for hotel rooms.

“They bring in all the com­plexities of the experience in subtle ways,” says general manager Alan Rae of Family Brothers’ work at the Clermont. “Everyone is going to see something different at a different time – a different detail on each stay.” About all you could ask from a brand identity, really.