Back to the future

There’s more to the City of Angels than dive joints and cocktail clubs. The 1933 Group is safeguarding the future of Los Angeles’ bar scene by preserving its past, all while calling attention to the city’s forgotten architectural gems.

Bobby Green is, to use his own words, “into kitsch”. But that evaluation may do him a disservice. What’s clear from spending time in the converted church he calls an office – in Pasadena, just out­side Los Angeles’ city limits – is that he celebrates the eclectic. Surrounding him are faded posters, a miniature plane sus­pended from the ceiling and a set of vin­tage cars. “In the 20th century we created the most unique stuff – and then we’re like, ‘Whatever’,” he says, baffled at why his countrymen and women don’t feel as strongly about “heritage” as he does.

Green has found an outlet for cel­ebrating the rare, historic and unusual as one of the partners at 1933 Group, a hospitality company with bars through­out the city. It started two decades ago when Green was running a café that he describes as a “tiki, sci-fi-themed place” (see page 145) and dreamed of a new kind of bar. This was before the “new wave” of watering holes hit Los Angeles, when the market was dominated by either spit-and-sawdust dives or high-end alternatives – with little in between. 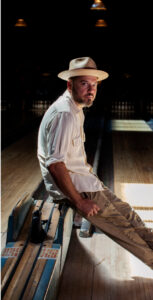 Green created a lookbook for what would become the group’s first endeav­our, which combined his time-honoured influences with the surroundings of a woodland hunting cabin. He peddled the idea around LA to find funding but it was years before he was put in touch with the folks who would become his partners: childhood friends and clothiers Dimitri Komarov and Dmitry Lieberman. The group’s first bar – modelled on Green’s concept and called Bigfoot Lodge – opened in Atwater Village in 1999.

One of the hallmarks of 1933 Group – which now has nine LA outposts – is its ability to find a neighbourhood on the rise and promptly plant a bar there. That was certainly the case in Highland Park when, a few years later, it opened La Cuevita, a cave-like mezcal-and-tequila affair that pays homage to, and is most influenced by, the world of Oaxacan spirits. The group was ahead of the curve, recognis­ing the neighbourhood’s potential about a decade before everyone else. But Green says other F&B players are now coming in “hard and fast”. For him there is no magic formula to finding locations. “It’s usually a case of, ‘Do I know people who live there?’” If a neighbourhood is already too established, it’s not for them.

One of the company’s most interest­ing transformations has seen it evolve from recreating an old feel in new bars to becoming a bona fide preservationist, something Green calls “more fulfilling than recreating history”. It started when he rescued a long-empty space shaped like a beer barrel. “I’d been seeing that place since junior high and it was decrepit,” he says. “But I remember seeing it and thinking that it was such a weird building.” The structure – one of LA’s last remaining examples of prewar programmatic archi­tecture, whereby buildings were designed to look like the product they sold – was restored to its former glory and opened as Idle Hour in 2015. Next up is the res­toration of famed old Hollywood haunt Formosa Café, set to open next year.

Green says that punters love the atten­tion to detail. “It’s full immersion, in a way,” he says. “It’s great when you have a bar where the drinks, the food, the inte­rior design and the music come together to represent a time and place.” Highland Park Bowl, a 1927 Spanish Revival master­piece reopened in 2016 with newly installed chandeliers above its bowling lanes, boasts wood-oven pizzas in a nod to the area’s former incarnation as LA’s Little Italy. People enjoy the food and drink but being at a 1933 Group bar means stepping into a different world: a New Orleans townhouse at Sassafras, or perhaps, a winter lodge at Bigfoot. It also highlights LA’s architectural heritage. “I hope what we do inspires others to do the same,” says Green.