It’s the boisterous Pentecostals who are enjoying a boom in Latin America.

When Jorge Bergoglio is formally installed as Pope Francis at the Vatican on Tuesday, thousands of his fellow Argentines will have risen before dawn to watch the ceremony on giant television screens installed around this city’s most famous national monument, the obelisk in the Plaza de la Republica. Well hundreds, anyway. 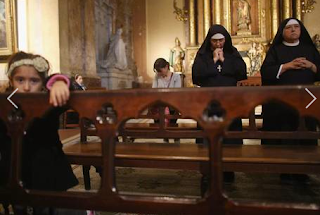 The choice of Cardinal Bergoglio may be an acknowledgement that Latin America is home to 40 per cent of the world’s 1.2 billion Catholics. Yet even here the church is not as hearty as it might look. Secularism is on the rise but something else has been luring customers away: the Pentecostals who are as boisterous in worship as the Catholics are demure.

Nowhere has the Pentecostal movement, a form of evangelical Protestantism, grown faster than in Brazil, notably among the poor. Visit the favelas, or slums, of Rio de Janeiro or Sao Paulo, and the ramshackle churches holding daily services with charismatic sermons and stirring song are usually Pentecostal. In 1970, 92 per cent of Brazilians identified themselves as Catholic. In the latest national census in 2010, the figure had dropped to 65 per cent.

The Church of Rome in Argentina is also in retreat. Veronica Gimenez Belivau, a professor and theology researcher at the University of Buenos Aires, calculates that while 76 per cent of Argentines call themselves Catholic today, only about 10 per cent are practising. She believes that 9 per cent of the country’s population is now Protestant. Of those the vast majority are Pentecostals. Government figures show that 90 per cent of all the new churches established from 2008 to 2011 were evangelical; they were opening at the rate of one a day.

“I think the evangelical faith has grown in Argentina and Latin America because of the feeling of family and community it gives followers, something missing in the Catholic church,” Juan Pablo Bongarra, 66, president of the Argentine Bible Society and pastor in the Open Door Church in Buenos Aires, said. “The church has also had a strong presence in poor neighbourhoods where it is normal to find evangelical priests living in slums and being part of poor people’s lives there.”

Sometimes, the Catholic-Protestant divide happens within families. Alberto Velasquez, 55, who lives in a shanty town by the tracks leading to the main Retiro train station here, goes several times a week to his Pentecostal church in the business district of the city while his wife, Maria, attends the tiny Church of the Virgin of Rosario in the slum. “We agree on everything, except for religion,” Maria acknowledged last week. “We can’t even talk about it.”

But even the Pentecostal churches here are not immune to the forces of secularism. “The part of the population that is growing even faster than the Pentecostals are the group that we can call the non-believers,” Professor Gimenez said yesterday. “In Argentina, 11 per cent of the people have no religion at all.”

If Cardinal Bergoglio was chosen in the hope that a Latin American pope would restore the sapped strength of the Catholic church here, Professor Gimenez is not sure it will help. “It will invigorate the group that is involved in the church already. The core of Catholic activists, including young people, will get a boost and a new sense of legitimacy. But for the rest of the Catholics it will not mean a lot of change.”

Mr Bongarra of the Bible Society says that as well as promising miracles, such as curing illness, Pentecostal preachers step in to help with marital problems, drug addiction or depression. If one person turns around their life after visiting the church, he says, a whole family is then tempted to convert from Catholicism. Argentina’s most famous evangelical priest, Carlos Annacondia – based in Quilmes, greater Buenos Aires – has been preaching to thousands and travelling the world for the last three decades.