Rough times are part of business. But putting the right people in charge can be the difference between sinking and swimming. We profile the firms rising from the ashes with the help of new CEOs.

Scour contemporary pop culture and it won’t be long before you come across a reference to Levi’s. Perhaps it’s the cut-off shorts currently in vogue with music-festival crowds; or perhaps it’s one of the many recent collaborations the brand has embarked upon, including a clothing tie-in for Netflix’s Stranger Things series. After years of irrelevancy, it’s clear that the US denim giant is back.

It has, in fact, been a watershed year for the San Francisco-based company. In March, thanks to what CEO Chip Bergh (pictured) calls a “perfect storm” of favourable market conditions, the com­pany went public for the second time in its history (the first was between 1971 and 1985), prompting a flurry of inves­tor interest as shares surged 32 per cent after the initial offering. Bergh says that the move has given Levi’s “flexibility” for growth and currency for acquisitions, should it choose that route. 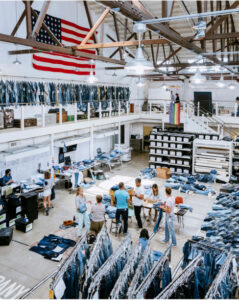 Inexorably linked with Americana, Levi’s feels like it has always commanded a place in people’s hearts and wallets. Founded in 1853 as a gold rush start-up that dealt in dried goods before inventing its signature jeans, everyone of a certain age has one of the brand’s adverts etched into their memory (the 1991 pool-hall spot, featuring The Clash’s “Should I Stay or Should I Go”, is a standout).

But this storied heritage was masking a much deeper crisis. From a sales rev­enue peak of $7bn in the mid-1990s, for­tunes started to slide as Levi’s, according to Bergh, “bumped around for the next decade”. Revenue sank to about $4bn for much of that period and, Bergh says, there was a moment when the company was on the verge of declaring bankruptcy.

It has now been eight years since Bergh took the helm. Under his stewardship fortunes have improved significantly, with revenue topping $5.6bn in 2018, up 14 per cent on the previous year. But the ride hasn’t always been smooth. When he joined, Bergh had to make a series of tough decisions. “The culture in this company needed to change,” says the 62-year-old, speaking from Levi’s Eureka innovation hub a few blocks from its main HQ in northern San Francisco. He is dressed in the standard-issue uniform of dark-wash jeans and a denim jacket (Levi’s, natu­rally). “The best way to change the cul­ture is to change the leaders.” He ended up letting most of the executive team go; some of them “self-selected out”, as he puts it. His new team, which Bergh says he’d put up against any leadership group, includes execs lured from big-name brands such as Gap, Calvin Klein, American Express and Walmart.

The IPO and subsequent life as a pub­licly traded company has brought tough moments too. Subject to the caprices of the market, Bergh admits that he “added a few grey hairs” when Levi’s published its most recent quarterly results in July and its stock price fell 7 per cent the fol­lowing morning. Though revenue was up across all regions, income was down due to the costs associated with the IPO. The results also showed that US wholesale, which represents some 30 per cent of its business, was down 2 per cent, linked to the well-documented struggles of some of the nation’s department stores. Bergh is aware that the company needs to diversify, whether through growing its network of own-brand shops, boosting e-commerce – still only 4 per cent of the company’s total business – or expanding the product line.

There are signs that this work is already underway. “They know their weaknesses and they’re really targeting them,” says Sidney Morgan-Petro, senior retail editor at trends forecaster WGSN. “They’ve been very strategic. Their legacy is denim but they’ve actually done a lot of work recently in tops.” Bergh argues that Levi’s has always been a lifestyle brand but had allowed itself to be typecast as simply a purveyor of blue-denim bottoms; the push to other items and its women’s line has been a bid to redress that imbal­ance. Meanwhile a deal in August to stock Red Tab jeans at big-box chain Target shows that Levi’s is thinking outside tra­ditional wholesale and willing to “go to where the consumer shops”, according to Cmo Jen Sey.

Bergh is a self-declared “brand guy”. After a spell in the army he spent three decades working at Procter & Gamble (P&G), including overseeing the Gillette portfolio. “I had a great career at P&G,” he says. “But the opportunity to join this company with such an iconic brand, and potentially turn it around, was too good an opportunity to turn down.” Bergh admits that clothing is “very, very different to packaged goods” but believes that much of what he’s learned has been transferable. For one, knowing brand appeal has been a powerful tool in an industry where many competitors are making similar products in the same factories.

Perhaps the most important lesson he’s carried from his previous work is that companies need to innovate. One of the earliest moves Bergh made was bringing the R&D hub (then known as the Corlu Research and Development Center) back from Turkey to northern California. Bart Sights, who runs the lab, calls the renewed proximity to senior product decision-making “the ultimate” and says that Bergh has encouraged a culture of entrepreneurship and “taking stabs at radical notions”. “When we built Eureka [in 2013] we realised we had this unique opportunity to change the future of jeanswear,” says Sights. “And I think we feel that obligation.” That feeling has seen Levi’s embrace technology to such an extent that when Bergh is asked if Levi’s has become another Bay Area technology company he answers, “Definitively the answer is yes.” He believes that if firms are not digitally disrupting and working out solutions to conundrums such as sustain­ability, “You’re going to be toast.”

Last year Levi’s launched Project FLX, a pilot-operating model that came out of the Eureka lab. With a planned three-year roll-out, it uses lasers to both speed up jeans production and eliminate many of the chemicals used in hand-finishing. Lasers were also at the fore of the US launch of the online Future Finish plat­form, which allows customers to choose from 3,400 customisation options; the resulting clothes are finished using recycled water. Levi’s has also teamed up with Seattle-based EvrNu to test using recycled cotton fibre in its production.

For all his technology talk, however, Bergh has bet big on bricks and mortar too, opening numerous shops since 2011. “Other retailers really struggle to figure out: is it in-store, is it online?” says Alexis DeSalva, a senior research analyst at Mintel, based in Chicago. “Levi’s realised that it’s both. In-store is still really impor­tant – they’re not pulling the plug on that.” As well as opening its largest shop in has recently opened a Tokyo flagship too, with half of its third floor dedicated to an in-house tailor. Bergh says that he views the shops like media: they are an experiential window into the Levi’s world that communicates how far the brand has travelled and where it wants to go.

Bergh’s ambitions don’t allow him to take anything for granted. “My biggest concern is that we’re going to get com­placent again,” he says. “We cannot let our guard down. The minute you’re run­ning slower than the fastest animal in the jungle, you’re breakfast.” There’s little doubt that Bergh is determined to take Levi’s not just back to where it was in the 1990s but far beyond. “A brand is a very difficult thing to kill,” he says. And Levi’s is alive and kicking.

1936: The Red Tab is first introduced on the company’s jeans.

1986: Moves into the trouser market with the launch of its Dockers brand.

2019: The company goes public for a second time.