No one is safe: drugs war hits Argentina

FFor years the country was largely untouched by the brutal cartels that control the narco trade in Latin America – but eight-year-old Leonardo is proof those days are over. By Ed Stocker in Rosario.

See the PDF
1
1
The events of that evening in January are etched into Vilma Jaime’s memory. The sun had set, but it was still oppressively hot and neighbours were outside in the street, chatting and drinking traditional mate tea. Then the gunshots began. 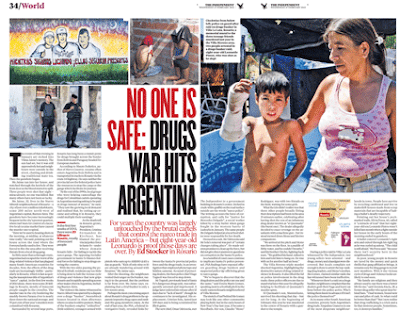 Ms Jaime ran into her house, and watched through the keyhole of the front door as the blood started to spill. Three people were shot that night – miraculously, no one was killed. But many others have not been so lucky.

Ms Jaime, 32, lives in the Nuevo Alberdi neighbourhood of Rosario – a city of just over a million inhabitants, some 200 miles north-west of Argentina’s capital, Buenos Aires. The gunshots have become increasingly frequent in the city’s poorest quarters, where turf wars for control of a lucrative local cocaine market have caused the murder rate to spiral.

“Here we’re used to hearing shots in the morning, at midday, at whatever time really,” she said, pointing out the house across the road where the Ferreyra family used to live. They were forced to flee the area after receiving threats from a local drug gang.

As little more than a through-route, Argentina had escaped the worst of the drug-related violence that has plagued many South American countries for decades. Now, the effects of the drug trade are increasingly visible – particularly in Rosario, which is fast acquiring the inauspicious title of Argentina’s “narco” capital. In the first few weeks of 2013 alone, there were some 20 killings in Rosario, mostly of innocent people caught in the crossfire. The murder rate in the city bordering the muddy-brown Parana river is nearly three times the national average, and 70 per cent of last year’s murders were committed with firearms.

Surrounded by several large ports, Rosario has long been a transit point for drugs brought across the border from Bolivia and Paraguay headed for European markets.

According to Mauro Federico, author of Narco Country, cocaine often enters Argentina from Bolivia and is transported in trucks to Rosario via the route 34 highway. He says neither the provincial nor the federal police have the resources to stop the cargo or the gangs which facilitate its journey.

“At the end of the 1990s, local groups who were helping camouflage the drugs for Colombian cartels operating in Argentina starting asking to be paid in drugs instead of money,” he said. “They saw the growing local demand and realised that, by cutting up cocaine and selling it in Rosario, they could multiply their earnings.”

With the two sides passing the political football, residents say too little is being done to halt the vicious cycle of drugs and violence that now grips Rosario and is rapidly spreading across other major cities in Argentina, including Buenos Aires.

The violence Ms Jaime witnessed in Nuevo Alberti was spurred by a dispute over a drugs “bunker”, breezeblock houses located in slum alleyways where cocaine is sold to punters. Many of the bunkers employ “soldaditos” (little soldiers), teenagers armed with pistols who earn up to AR $350 (£45) a day as guards. “Kids of only nine or 10 are already wandering around with firearms,” Ms Jaime said.

After the shooting, the neighbours vented their anger on the bunker, razing it to the ground. But the problem is far from over, Ms Jaime said, explaining that a rival bunker is only a few streets away.

Perhaps the most concerning aspect about Rosario’s drug problem is the apparent impunity drug capos and rank- and-file gang members enjoy. At the end of last year, the PSA , a federal investigative body, revealed links between the Santa Fe provincial police force and the drugs trade, in an investigation that employed phone taps and hidden cameras. Accused of protecting dealers, the then police chief Hugo Tognoli was forced to step down.

Mr Tognoli, previously head of Santa Fe’s dangerous drugs unit, was subsequently arrested and imprisoned. A judge later ordered his release after 15 days due to “lack of merit”, though he continues to be investigated. His replacement, Cristian Sola, lasted just 109 days and is being scrutinised for illicit gains.

The new chief, Omar Odriozola, met The Independent in a government building in Rosario’s centre. Etched in crude white graffiti on the road surface outside are the words “narco police”. The writing accuses the force of corruption, and calls for “justice for Mercedes Delgado”, a social worker killed by a stray bullet when gangs fought in the western barrio of Ludeuña in January. The same people Ms Delgado helped at a local food shelter were responsible for her death.

Dressed in a suit, Mr Odriozola said Mr Sola’s removal was part of “certain changes taking place”. He made solemn promises to clean up the force, but did not give direct answers to questions on corruption in the Santa Fe police.

As a handful of court cases continue to implicate Santa Fe police personnel, PSA findings have exposed officers guarding drugs bunkers and and suspected police tip-offs being given to narco gangs.

“We’ve begun to discover that the drug dealers and the police are one and the same,” said Estela Maris Gomez, speaking next to a football pitch in the south-eastern Rosario neighbourhood of Villa Moreno.

The stretch of turf behind Ms Gomez may look like any other community playing field, but in the early hours of New Year’s Day last year, it became a bloodbath. Her son, Claudio “Mono” Rodriguez, was with two friends on the field, waiting for some girls.

What the trio didn’t realise was that three other people broadly fitting their description had been in the area 15 minutes earlier, celebrating after having shot the son of an infamous drug dealer known as “el Quemado” (the burnt one). The dealer allegedly decided to exact revenge on the assailants with a machine gun – but instead mowed down Mono and his two companions.

“We arrived at the pitch and Mono was there on the floor, in a puddle of filthy water, and he couldn’t breathe,” said his brother Chicho, fighting back tears. “We grabbed his hand, talked to him and told him to hang on. He was with us for another half an hour.”

The Villa Moreno triple murder shocked Argentina, highlighting the destructive nature of drug-related violence in Rosario. It also lifted the lid on police involvement in the drug trade; three police officers are due to stand trial later this year for allegedly helping to facilitate el Quemado’s murder spree.

El Quemado’s son, Maximiliano, survived his shooting that day – but not for long. At the beginning of February this year he was murdered in the centre of Rosario with a gunshot to the temple.

During a police raid in Villa La Lata witnessed by The Independent, two young sellers were arrested – and drugs, money and a handgun were discovered. But locals complain not enough is done to arrest the top-ranking drug leaders, and Mono’s mother, Ms Gomez, claimed similar raids she has witnessed have been ineffective.

“Whenever there’s a raid on a drugs bunker, neighbours complain that the dealers grab their bags and leave an hour before the police arrive. Who’s letting them know in advance if it isn’t the police themselves?”

As in many other South American countries, poverty fuels Argentina’s drug trade. Empalme Graneros is one of the most desperate neighbourhoods in town. People here survive by recycling cardboard and live in makeshift houses made from scrap materials that are incapable of halting a bullet’s deadly trajectory.

Pointing out her house’s pockmarked walls, Silvia Perea, 43, called it “a miracle of God” that her eight-year-old son Leonardo Pintos wasn’t killed last month when a fight outside her house in the early hours of the morning ended in gunshots.

A bullet entered Leonardo’s right arm and exited through his right leg as he was curled up asleep. “The child is still afraid,” Ms Perea said. “Because there isn’t security here in the neighbourhood.”

As poor, young people in Rosario are lured by the money and quick thrills that gang affiliation brings, it remains easy for drug gangs to recruit new members. With it the vicious cycle of drugs and violence looks unlikely to end soon.

“My family are religious and they always used to say there was a better life for me,” said Jeremia Encia, 28, a former drug seller who spent time behind bars. “I had women, brand new cars and piles of cash. So what could be better than that?

“But I now realize that drug trafficking is a trick and a lie that destroys people. Sometimes, too, it destroys families.”