Orphaned and stolen because their parents were left-wing

Ed Stocker meets the victims of Argentina’s ‘Dirty War’ who lost parents – and the truth of their identity.

See the PDF
1
1
Imagine if your life turned out to be a lie. Imagine if the stories you were raised on and the values you had been taught were the product of an enormous deceit. Imagine if your parents were not relatives at all and even complicit in the death of your biological family.

Of all the violations that took place during Argentina’s “Dirty War” – conducted under the country’s last military dictatorship, which ruled between 1976 and 1983 – the abduction of children born to left-wing parents was based on the most twisted logic. 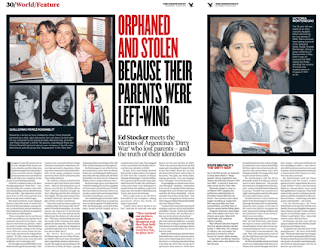 But until an historic court ruling in Buenos Aires last week, in which two former de facto presidents, among others, received heavy prison sentences, there had been no formal recognition of the junta’s chilling plan.

“Discovering that you’re not the son of who you think you are, but the son of someone else you’ll never know – and that you were born in captivity – that’s too much to deal with,” said Guillermo Pérez Roisinblit, sitting in the living room of his one-storey house 40 minutes’ train ride from the Argentinian capital. “It’s like someone pulling out the ground from under your feet and suddenly you’re starting to fall.”

It is thought around 500 babies were abducted during the dictatorship. Their parents were arrested without charge and held in hundreds of detention centres that operated in Argentina, where they were tortured for their political beliefs. In the camps, pregnant women knew that their child’s arrival was also their death sentence.

The military always waited for the mothers to give birth before they killed them – often by throwing them out of planes over the Rio de la Plata (River Plate). Military families brought up their offspring and hid the children’s true origins. The aim was to ensure they wouldn’t follow the “perverse” ideologies of their mothers and fathers.

“Does the word love have a place in a relationship that began like that?” asked Victoria Montenegro, 35, as she nurses an espresso in downtown Buenos Aires. Her voice quivers as she talks about the abductors who raised her. “This was a relationship that was the result of the violation and subjugation of someone else. They tortured our mothers, made them disappear and then kept hold of us. No, the word love has no place here.”

Mr Pérez Roisinblit and Ms Montenegro are two of the 105 stolen babies who have been identified since Argentina’s return to democracy, mostly through the painstaking work of Abuelas de Plaza de Mayo, a group of grandmothers searching for the children of their disappeared daughters.

Ms Montenegro is one of the few babies from these cases born in liberty, before she was kidnapped with her parents when she was 13 days old. Mr Pérez Roisinblit was born in the infamous ESMA torture camp in Buenos Aires.

Ms Montenegro grew up as María Sol Tetzlaff, thinking she was the daughter of Lieutenant Colonel Hernán Tetzlaff. She was raised in what she refers to as an ultra-conservative environment that included schooling in a nunnery.

Her world fell apart in the late 1980s when the first abduction accusations were levelled against Tetzlaff and his wife. Ms Montenegro , around 10 at the time, found herself caught up in a complicated court case that dragged on for years before she finally discovered her true identity in 2000.

In May, DNA tests finally showed that a body washed ashore in Uruguay in 1976 were the remains of Roque Orlando Montenegro, Victoria’s father. Her parents had been left-wing militants from the People’s Revolutionary Army when they were kidnapped a month before the military coup in the same year. Her mother, Hilda Ramona Torres, has never been found.

When a girl came to see Mr Pérez Roisinblit at his workplace asking questions about his birth, he wasn’t interested.

“I didn’t have much desire to see her,” said the 33-year-old, who also found out his real identity in 2000. “Here was a person who knew my full name and was asking if I wanted to talk to her. But I didn’t know her. As well, she had a friend there with a baby in her arms. Two girls, one with a baby, asking questions. You can imagine what I thought. I was 21 at the time.”

He grudgingly accepted a letter from one of the girls – Mariana – tucked inside a book. It explained that thought they were brother and sister, and that Mr Pérez Roisinblit – whose surname was Gómez at the time – was the son of disappeared Montoneros (left-wing guerrillas) Patricia Roisinblit and José Manuel Pérez.

“I opened the book and found myself staring at a picture of my [real] mother and father,” he said. “At the time I didn’t know it was them. But my likeness to the man in the photo shocked me.”

Mr Pérez Roisinblit gave a DNA sample to the national database. A month later he was coming to terms with his real identity as well as getting to know a sister and grandmother he never knew he had.

Both Ms Montenegro and Mr Pérez Roisinblit have come a long way since their earth-shattering discoveries. It has been a confusing and disturbing road that has often thrown up more questions than answers. Both have found themselves at the centre of highly-politicised court cases in which they felt they had to choose between the abductors who raised them, and a new biological family of strangers they had to get to know from scratch.

Ms Montenegro and Mr Pérez Roisinblit admit to feeling an attachment to their abductors – the people they had once thought were their parents – as they watched them being sent to prison. Tetzlaff was sentenced to eight years in prison and his wife spent six years under house arrest.

Tetzlaff was never convicted for the death of Ms Montenegro’s real parents, although she believes he is responsible. Impunity laws in place at the time of his conviction failed to recognise the state-sponsored stealing of babies and also pardoned some of the dictatorship’s worst atrocities.

Ms Montenegro talks about a “human link” she had with them, and admits she kept in contact until they died – something her newly discovered maternal grandparents never accepted.

“I know they’re not my parents,” she said. “But I also spent many years of my life with them and I don’t have any feeling of hate for them.”

Ms Montenegro and Mr Pérez Roisinblit said last week’s verdict against former Argentinian dictators Jorge Rafael Videla and Reynaldo Bignone, among others, was a small but significant recompense. They both insist on the need to continue investigations until the hundreds of other abducted babies – still living with false names and families – are found.

Like Ms Montenegro, Mr Pérez Roisinblit is now married with his own family. His son and daughter have given him a chance, he said, to start celebrating his own birthday again, as well as Mother’s and Father’s Day – dates that used to cause a flood of tears.

In February, his four-year-old son Ignacio asked who the black-and-white photos of people in the picture frames were.

Victoria Montenegro
The 35 year-old was raised as an army colonel’s daughter before discovering her true identity in 2000. She is pictured here holding a portrait of her biological father, Roque Orlando Montenegro, during a press conference in Buenos Aires in May, when it was announced that DNA results had finally identified the remains of a body that washed ashore in Uruguay in 1976 as his.

Guillermo Pérez Roisinblit
Raised by a former air force intelligence officer, Pérez Roisinblit discovered the truth about his birth after he was contacted by his biological sister, Mariana. His parents, José Manuel Pérez and Patricia Roisinblit were members of the left-wing Montoneros guerrilla group who “disappeared” in the “Dirty War”.

State brutality: The ‘Dirty War’
Up to 30,000 people are believed to have been killed or “disappeared” during Argentina’s last military dictatorship between 1976 and 1983 – a period of state brutality known as the “Dirty War”.

Generals staged a coup on 24 March 1976, toppling the ineffective administration of President Isabel Martinez de Perón. The country’s new rulers began rounding up suspected left-wing guerrillas and their sympathisers, sending them to torture camps before killing them.

Pregnant prisoners were killed after their babies were born, the infants were given false birth certificates and raised by military families.

Raul Alfonsín became Argentina’s first democratically elected leader in 1983 after the collapse of military rule, and began the process of trying the armed forces for human rights abuses.

It was later stymied by impunity laws, which were only lifted in the last decade.