After 14 years as Bolivia’s president, Evo Morales was forced to resign last November. Now exiled in Argentina, he is rallying supporters and seeking his party’s return to power.

Club Deportivo Español can’t claim to be members of Argentinian pro­fessional football’s elite. Chugging along in the third division, its sta­dium is near a shanty town and an informal recycling centre in Bajo Flores, a southern neighbourhood of Buenos Aires. Yet today’s carnival-like atmosphere makes it feel as though the team have pulled off the impossi­ble and been crowned national cham­pions. The one caveat? The crowd of 40,000 hasn’t actually come to see a game.

Instead, the star attraction is Evo Morales, whose presidency of neigh­bouring Bolivia came to a swift end in November after almost 14 years. The nation’s first indigenous leader was pressured into resigning following allegations that he had “stolen” the election that was held in October. The accusations led to street protests, seri­ous violence and then, with the sup­port of the military, the appointment of opposition senator Jeanine Áñez as interim president. It was labelled a coup by Morales and his support­ers. Since then the former president’s circuitous exile has taken him first to Mexico and now Argentina, where a warm embrace by the leftist govern­ment has allowed him to base himself closer to home. 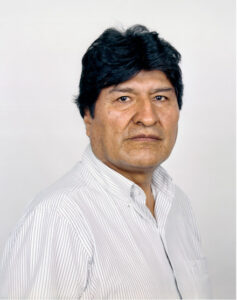 “Jallalla Bolivia”, a compère roars from the stage as part of a call-and-response with the crowd. Loosely translated as “Long live Bolivia” in the Aymara and Quechua languages, it signals the start of the warm-up entertainment celebrating Bolivia’s population. The show ranges from guitar and pan-pipe ensembles to a smoky ancestral offering to the god­dess Pachamama. Finally, the man who is introduced as the “leader of Latin America” takes to the stage. There’s a flower garland around his neck and a sea of multicoloured Wiphala flags – symbols of Andean pride and unity – stretching out in front of him. “It’s a question of time,” he shouts. “We’re going to return to government!”

If this makes him sound as though he’s in campaign mode, that’s because he is. All sides have agreed to fresh Bolivian elections on 3 May. And though Morales is barred from run­ning again, he still pulls the strings within his political umbrella group, the Movement Towards Socialism (MAS). Luis Arce, the mas presidential candidate and a London-educated former economy minister (a consen­sus pick who wasn’t the first choice for many in the mas), is sitting in the front row of the crowd with his more charismatic running mate, David Choquehuanca. But it’s clear that people have come to see one man: “Evo, no estás solo, carajo!” (“Evo, you’re not alone, dammit!”) ripples around the stadium.

Morales, a former coca-leaf farmer and trade unionist, is undeni­ably preaching to the converted. And yet it’s the support of the people gath­ered here that the mas will need if it is to have any chance of winning in May. Argentina is home to the larg­est expat Bolivian population and its overwhelmingly working-class, indige­nous composition makes it part of the mas’s traditional base (more than 82 per cent of Argentina-based Bolivians voted for Morales in October’s election). “We don’t want to sell off what Evo achieved,” says 37-year-old Severina Cruz, wearing traditional Bolivian dress. She has journeyed from the town of Pilar in Buenos Aires province to see Morales speak. Next to her is her 75-year-old mother-in-law, who can’t read or write. Nearby, Edith Colque, 33, explains that she travelled 50 hours by bus from Bolivia. Her T-shirt bears the slogan: “We’ll be back and we’re millions,” alongside images of Morales and Che Guevara.

Morales’s raised-fist salute and speech, peppered with references to the US “empire” and the negative hemispheric influence of the “grin­gos”, are a reminder of a language that is increasingly scant in a region where socialist movements and revo­lutionary guerrilla groups have either waned in influence or disbanded. Yet Morales rose to prominence at the same time as a crop of left-leaning Latin American leaders high on a commodities boom, including Hugo Chávez in Venezuela, Rafael Correa in Ecuador, Luiz Inácio Lula da Silva in Brazil and the Kirchners in Argentina. But whereas many countries have shifted to the right, become enmeshed in corruption scandals or, in the case of Venezuela, embraced authoritari­anism, Morales outlasted them all – and with an economic record that was hard to knock. In an interview with monocle a few days later, he is keen to point to his achievements. “We’ve shown that another world, without North American policies or a capitalist system, is possible,” he says.

“He had a legacy of implementing programmes aimed at curbing pov­erty and boosting literacy in margin­alised populations,” says Paul Angelo, a fellow for Latin American studies at the Council of Foreign Relations in Washington. Alongside an average gdp growth rate of almost five per cent during Morales’s time in office, extreme poverty in Bolivia was more than halved between 2005 and 2018, according to government figures.

Morales’s biggest strategic mistake might have been staying on as long as he did, instead of handing over to a successor. “As he tried to push more and more to remain in power, his legitimacy was eroded,” says Filipe Carvalho, a Latin America analyst at risk consultancy Eurasia Group in Washington. Morales reasons that his long tenure was due to the fact that he “accepted” the will of the people and that “all social movements asked me to continue with our process of change”. But that meant twice getting around the country’s two-term limit by using institutions to his advantage, including a justice system packed with MAS appointees.

In 2013 the nation’s highest court ruled that Morales’s first term wouldn’t count towards his quota because he’d ushered in a new con­stitution during that period (he went on to win a third term in 2014 with 61 per cent of the vote). Then in 2016, after he narrowly lost a referendum on term limits, he sought what he called a “constitutional way” by again appeal­ing to the court, which ruled that it would be a violation of Morales’s human rights if he were not allowed to appear on the ballot for a fourth time.

The controversy over the 2019 elec­tion rumbles on. Luis Almagro, sec­retary general of the Organisation of American States, accused Morales of his own coup by committing “election fraud”. Morales, in turn, told us that Almagro “deserves a lawsuit” (a study by MIT researchers concluded that there was no evidence of fraud). The country has fractured along old fault lines of race, religion and geography.

The interim government has wasted little time in taking what Angelo from the Council of Foreign Relations calls “excessive liberties to forge a new political dynamic” (one opposed to Morales). This includes the recogni­tion of Juan Guaidó as the legitimate leader of Venezuela, breaking diplo­matic relations with Cuba and open­ing criminal investigations into about 600 people, including Morales, for terrorism and sedition, and preventing the former leader from running even for a senate seat in May. The Bible – long absent from politics under Morales – now appears clutched in the hands of right-wing presidential hopefuls, including interim presi­dent Áñez and another aspirant, Luis Fernando Camacho, who protested against Morales last year.

Caught in the maelstrom is the role of the US, which “historically considers the region as part of its natural area of influence”, according to Santiago Leiras, a political scien­tist at the University of Buenos Aires. The White House was quick to herald Morales’s resignation as a “signifi­cant moment for democracy” and has been putting pressure on Argentina to rein in his outspokenness. A shift to the right in Bolivia could result in an about-turn on his policy of national­ising the country’s natural-resource industries, and an insistence on joint ventures with foreign companies. Political change could prove a com­mercial boon for overseas countries and multinationals that previously shunned the socialist government.

Not that Morales is allowing him­self to be anything other than opti­mistic ahead of the elections. “We’re going to win because we’re on the side of truth,” he tells Monocle. “We’ve always represented a process of change for the humblest and poor­est. This is our fight.” And then, with a “thank you, compañero”, he’s off to his next meeting. There’s a lot to be done, after all.

Q&A: Evo Morales
A few days after his speech in Bajo Flores, Evo Morales held a meeting in the San Telmo barrio with del­egates from the Movement Towards Socialism (MAS). The French-inspired fin de siècle building where it took place is a trade-union office; since Morales arrived in mid-December, it has also become the headquarters of a government in exile. Save for a couple of heavies operating an electric gate downstairs, there is little indication that the man who was one of Latin America’s longest-serving presidents now spends much of his time here. After the meeting, Morales sat down with Monocle.

Is it difficult for you to return to Bolivia at the moment?
Yes, it’s still difficult but I have a lot of hope. We’ll be back through per­sistence and perseverance. All of the legal proceedings against me are for sedition and terrorism and not for corruption or crimes. These are clearly political proceedings.

How do you view the MAS’s chances in May’s election?
I am very optimistic. Happily, the internal problems [over the choice of candidates] have been resolved. We’re now organised for the campaign.

Are you afraid of what the interim government might do ahead of elections?
First of all, it’s not an interim govern­ment, it was a coup d’état. There’s a difference because an interim gov­ernment wouldn’t be changing any­thing and only overseeing elections, which is what an interim government needs to do. But it’s not just a coup by Bolivians against Bolivians – it’s also by the North American empire against the process of change. When the gringos bite they don’t let go. That’s our fear. That’s why we’re call­ing on the United Nations and other international organisations to guaran­tee that these elections are free and fair. Because with people confined [to prison] or taking refuge in embassies, what sort of elections would they be?

Why has the US taken such a hard line against your exile in Argentina?
We’ve shown that another world with­out North American policies or a capi­talist system is possible. Over 13 years, Bolivia came first six times in terms of economic growth in South America. We’d never come first before. When I arrived in government, Bolivia was in last position in South America and penultimate in the Americas in terms of economic growth and the reduction of poverty. Now we’re first. It’s sad that the US doesn’t want rivals; it isn’t able to believe that there’s another model capable of meeting the needs of the people. We’ve begun to substitute importation through the industrialisa­tion of fossil fuels and lithium. We’ve also opened the market to China. Just imagine Bolivia’s future.

Which of your achievements make you the proudest?
The reduction of extreme poverty from 38.2 per cent to less than 15 per cent. Also the fact that Bolivia is now without illiteracy, according to Unesco. And that, over 13 years, the country spent six of them in first place in economic development in South America. We have diversified and increased the productive system through internal and external markets.

What’s still left to do?
The issues of infrastructure and devel­oping new highways. When I arrived in government there were barely 1,000km of paved roads in the coun­try but by December 2018 there were 5,300km; last year another 2,700km were under construction. Our airports need finishing too.