In the first of a new series looking at US cities and the people fixing them, we stop off at Albuquerque to find out why New Mexico’s most populous city is on the up.

Many who were born in Albuquerque, New Mexico, with its suburban sprawl and dusty desert surroundings, feel the pull of bigger city lights. Yet many return. “This place has a way of calling you back or getting its hooks in you,” says the city’s mayor, Tim Keller. A former investment banker, he’d lived in places all over the world, from Moscow to Washington and Cambodia, before realising he wanted to go into public service – and move back home.

Looking out from his 11th floor downtown office, it’s easy to see what drew the 41-year-old back a decade ago. The Sandia Mountains are washed in the pink late-afternoon light, which gave rise to their name (sandía is Spanish for watermelon). But the former Democratic state senator, who has been mayor of Albuquerque for just over a year, knows that he doesn’t inhabit a “flaw­less utopia”. The city was catapulted into the limelight by the success of the Breaking Bad TV series that was filmed here, which Keller calls a “mixed blessing” for Albuquerque. A boon for tourism, it also shone a light on the poverty, addiction and crime that remain the city’s main challenges. 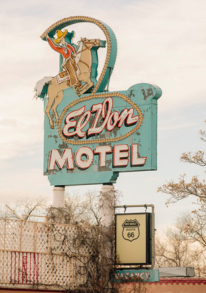 Not that Myra Ghattas is having any of it. “It’s easy to be negative in sec­ond-tier cities,” the restaurateur says as she sips coffee at a back table in Slate Street Café, which she opened 13 years ago. “You can say the crime is too high, education problematic or the economy sluggish. But that’s a cop-out; let’s celebrate the good.” Ghattas is another returnee. She gave up a job working for Hyatt in San Francisco and Washington to start something back home. She is about to launch her third restaurant and employs some 45 locals. “I believe in this community.”

Ghattas comes from a family of restaurateurs. Her father ran Duran Central Pharmacy and its accompa­nying soda fountain, which her sister Mona has inherited, swapping out the milkshakes for New Mexican cuisine. Her brother also has a restaurant. Spend enough time in Albuquerque and families such as the Ghattases, as well as the Rembes, Garcias and Encinias (more on them soon) will regularly crop up in conversation.

These entrepreneurial families are united in their love for the city. They are willing to take risks, often invest­ing their own money. They’re also put­ting a stamp on the city, sometimes in unexpected ways: take the four gen­erations of Encinias flamenco danc­ers who have made it a global capital for the discipline. Matriarch Eva, who founded the National Institute for Flamenco in Albuquerque in 1992, also organises “the most impor­tant flamenco festival in the world outside Spain”.

Drive 15 minutes west of downtown and you’ll arrive in the semi-rural area of Los Ranchos. Head up a small drive­way there and you’ll enter the grounds of Los Poblanos Inn. The original hacienda, an 1850s construction with a 1930s addition by renowned New Mexican architect John Gaw Meem, was the home of Armin and Penny Rembe. But when Armin’s sister and brother-in-law decided to move out in the 1990s – leaving the adjoining farm building that they’d owned, known as La Quinta – the Rembes were faced with a dilemma. They could allow it to be sold and possibly developed or they could buy the building and its land, return it to its historical func­tion as a cultural centre and then turn their own home into a six-room B&B to keep the money ticking over. They did just that.

Penny admits that they were “fading fast” by the late 1990s, over­whelmed by what they had taken on. Which is when son Matt returned to Albuquerque after several years on the art scene in New York and came on board as executive director. He quickly realised that the family needed to double-down and upscale. As well as overseeing the intricate New Mexican design details in the interiors alongside the branding, Matt has spearheaded the inn’s growth to 50 rooms. There is now a seasonal restaurant that incorporates produce grown on-site and by nearby farm­ers, and a farm shop, scented with lavender from fields Armin planted.

It’s a family affair that includes Matt’s developer brother Jay, who has helped with red tape and planning permis­sion for the expansion. When not doing that Jay pushes his own separate mixed-used projects that try to “make a difference”, promoting density and walkability in a city more accustomed to the car.

The Rembes aren’t about the bottom line according to Matt. Their motivation, he says, is showing people the unique history of the property and how a sustainable business model can work. The family has taken out two loans totalling $15m (€13m) and remortgaged the farm. “We grew up here and realise how important it is,” says Matt. “We get to sell New Mexico and, hopefully, enrich our community.”

Not far from the Rembe farm you can spot a property belonging to Ed Garcia. He’s the scion of one of the city’s most well-known families; his grandfather set up an auto business focusing on truck parts and sup­plies in 1938. But it was his father Julian who really launched Garcia Automotive Group, banking on imported Toyotas taking off in the US market. Today Garcia and his brother Carlos have successful dealerships in Albuquerque, Santa Fe and El Paso.

Garcia’s energies are focused on a plot of land called Glorieta Station, a three-hectare site that used to contain a beer-distribution centre. He marches down the street pointing out the pave­ments he will expand and explaining the street lighting he plans to install. He has already moved a coffee shop onto the site and is renting another space to technology firm Xpansiv, part of a plan to nurture a tech corridor. A restaurant is slated for later this year and Garcia talks about putting an art gallery inside the site’s standout build­ing, a redbrick tower from the 1880s that used to be the tallest structure in Albuquerque. He’s also been collect­ing neon signs, largely from buildings that used to line Route 66, which cuts through town, for an outdoor museum. “I love Albuquerque,” he says. “I could live anywhere but I’ve decided to live here and invest. I’m all in – I don’t have a plan B.”

While these forward-looking families seem intent on fixing their city, they won’t be able to do it alone. They rely on the mayor being able to work with them. The fruits have already started to show: in August, city hall lured California outsourcing firm TaskUs to downtown through funding incentives. The mayor also pulled off a coup last October when Netflix announced it would be open­ing a production studio in town. And while empty shops and social prob­lems are still there, Keller argues that having a friend in the governor’s seat, Democrat Michelle Lujan Grisham, will be a big help. “We have an amaz­ing core identity,” he says. “We want to be the best city we can be on our own terms, in our own way.”

Doing things differently:
Few places in the US have the ancient and complex history of New Mexico. Inhabited for thousands of years by Native Americans who still occupy pueblos around the state, the Spanish subsequently arrived from the south via the Camino Real. A group of colonising Spanish families officially founded Albuquerque in 1706 and today its residents – more than 900,000 of them – make it the most populous city in the state.

Like the rest of New Mexico, a blue state flanked by red Texas to the east and Arizona to the west, Albuquerque is “majority minority” in terms of its racial make-up (almost half the population is Hispanic). The city, with its family restaurants and gently decaying motel signs lining Route 66, sometimes goes by the nickname of “Albuquirky”. “We’re a little different,” says mayor Tim Keller. “That’s something that I think we’re very proud of.” But the city has serious problems too: violent crime rose 23 per cent between 2016 and 2017.