Being a risk-taker yet remaining part of the mainstream is a tricky thing to pull off. Three proponents of the art, Elizabeth Diller, David Chipperfield and Ellen van Loon, explain how they balance architectural innovation with commercial reality.

“God, that’s so scary.” Elizabeth Diller has just been referred to as architecture royalty and it’s making her feel uneasy. Despite being the force behind one of the world’s most recognisable urban regen­eration projects – New York’s High Line – there’s little hint of the “starchitect” to her, even if packed schedules and near-constant air travel are standard procedure these days. “I still want to do things my way,” she says from the firm’s Manhattan headquarters, close to the former raised railway turned leafy walkway. “The studio has always been interested in ideas pro­pelled more by curiosity and experimen­tation than just getting rich or famous.”

The 64-year-old founded Diller + Scofidio (it would later add partners Charles Renfro and, most recently, Benjamin Gilmartin) with husband Ricardo Scofidio in New York’s Astor Place in 1981. Having cut her teeth in a Big Apple of grime and crime, abuzz with counterculture, she was a self-declared nonconformist – something that’s still part of her make-up today, she argues. Initially she never thought she’d join the formal ranks of architecture, instead envi­sioning “making the arts more broadly”. Diller says it was a first fellowship at the American Academy in Rome in 1981 when things really started to “pop in 3D for her” but the biggest shift came in 1990 when the studio was asked to design a home, her first building commission. “It was the first time I realised that it’s possible to connect architecture and have a thought – to be able to execute a whole thought in an architectural work,” she says. “Because I always believed it was compromising.” 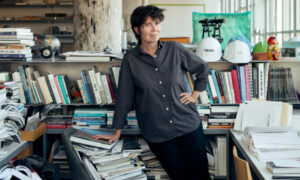 That early residence, the Slow House in North Haven, Long Island, was never completed because the homeowner ran out of funds – but its curved design and radical rethink of modern living piqued the interest of the design world, with the Museum of Modern Art acquiring models and illustrated plans. It was a building that, in many ways, strived to not be a building at all, described on the Diller Scofidio + Renfro website as “a passage from physical entry to optical depar­ture or, simply, a door to a window”. And yet suddenly – and seemingly without really seeking it – the studio was heading towards the big time.

“I guess the question is what does it mean to be mainstream?” says Diller. “I think if it means that your work is becoming diluted to appeal to a major­ity then it’s bad. If it means that you’re communicating to a broader audience, it’s actually kind of interesting.” It’s an issue that Diller has had to ponder as her firm has taken on a series of mega-projects that have garnered critical acclaim while remaining avant garde. From the experimental Blur Building shown at the Swiss Expo 2002 – a pavilion that used the elements of the lake it sat on to create an enveloping fog – the firm has gone on to work on Manhattan’s Lincoln Center, opened the High Line, overseen a Moma reno­vation project and designed the bold, honeycomb-like Broad Museum in LA, among other works. Last year the firm also won the bid to build a new concert hall for the London Symphony Orchestra and is currently gearing up for the opening of The Shed, a New York cultural venue, in spring next year.

One of the hallmarks of these proj­ects is a willingness to take design risks. That has meant pushing ahead even when there has been criticism or adversity, from those opposed to Moma’s expansionism to the naysayers decrying the amount of money that the London project will cost. But Diller’s  need to see through an artistic vision started with the High Line. During its early stages, then mayor Rudy Giuliani greenlit the demolition of the railway structure believing, rather ironically when seen from today, that its con­tinued presence would keep property prices in the area deflated. The order was subsequently rescinded by his successor, Michael Bloomberg. Diller admits that the firm wasn’t the first to dream up a reuse project of its kind (Paris’s Promenade Plantée got there first) but says that she never foresaw what a reference point the High Line would become. “The notion of taking a piece of urban infrastructure that’s sort of obsolete was something that I think a lot of people didn’t really think about,” she says. Nowadays it’s being copied by cities around the globe.

Diller’s risk-taking is also on full dis­play at The Shed. Part of the vast Hudson Yards development in asso­ciation with the Rockwell Group, it’s a building whose external shell – a steel diagrid frame – is set on slid­ers, meaning it can open onto an adjoining plaza, shifting the size of its imprint and playing with the notion of outdoors and indoors. “It’s a constant concern of how you design a building that is flexible enough to be able to be transformed by others but still have architectural character,” says Diller. “Because the typical response is that you make it neutral and generic, and therefore it can be used for many things. But I actually don’t believe in that.”

Diller has never lost the pas­sion for the arts that she had when first starting out. Work with cultural institutions courses through Diller Scofidio + Renfro’s portfolio (for The Shed project, for example, the firm responded to a request for propos­als from the city long before a private client existed) and she’s constantly tinkering with side projects. Many of these are money-losing artist instal­lations done simply “because they need to be done”, like the time the practice filled New York’s Columbus Circle with 2,500 traffic cones for 24 hours in 1981, or a video installation that appeared in an old porno theatre in 1993. The desire to do everything from overseeing exhibitions to creat­ing installations may feel “so normal” but it’s the multi-disciplinary nature of Diller Scofidio + Renfro that sets it apart.

In early October, Diller went one step further and co-created and co-directed The Mile-Long Opera, an open-air performance on the High Line featuring 1,000 singers and billed as a biography of the city at 19.00, when life transitions from day to night. Diller says the opera tapped into the idea of the speed of change in the city, something that had been weighing on her mind. Indeed, given how the High Line has been such a vehicle for transformation in the area – including all the talk of gentrifica­tion and price hikes that accompanies it – it seemed like a logical step. But Diller is keen to point out that the project was about being “hypersensi­tive” rather than taking a stance on what is good or bad. “Ultimately it’s a celebratory project and kind of a love affair with New York,” she says.

There’s little sign that Diller is easing up on the workload as she breaks off the interview to dash to JFK for a flight to Milan. And with projects underway or in the pipeline everywhere from China to Brazil, Russia and Australia, the year ahead isn’t likely to be any less hectic. Not that Diller would have it any other way. “For me it’s all about curiosity and doing something different that I’ve never done before,” she says. “It’s the excitement of that and I think that I will never be satisfied. I just don’t have that kind of character!”