For most people, comics represent everything from tongue-in-cheek satire to swahbuckling escapism. But for Matt Bors, editor at Amsterdam-based online publisher Cartoon Movement, they’re the ideal platform for exploring long-form political journalism…

…with a firm emphasis on reality rather than fantasy. Cartoon Movement, which has 139 cartoonists from 75 countries in its network, sent Bors, an American cartoonist, and his Dutch colleague Tjeerd Royaards to Haiti for a month last summer. Their task was to find a local artist and journalist to create a cartoon about day-to-day experiences in the impoverished Caribbean nation. 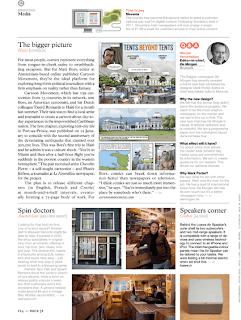 The first chapter, exploring tent-city life in Port-au-Prince, was published on 12 January to coincide with the second anniversary of the devastating earthquake that claimed over 300,000 lives. This was Bors’s first trip to Haiti and he admits it was a culture shock. “You’re in Miami and then after a half-hour flight you’re suddenly in the poorest country in the western hemisphere.” The pair recruited artist Chevelin Pierre – a self-taught cartoonist – and Pharès Jérôme, a journalist at Le Nouvelliste newspaper, for the project.
The plan is to release different chapters (in English, French and Creole) at month-and-a-half intervals, eventually forming a 75-page body of work. For Bors, comics can break down information better than newspapers or television. “I think comics are just so much more immersive,” he says. “You’re immediately put into the place by somebody who’s there.”
Share Tweet Share Pin