Camper vans are, well, having a moment. And unlike the unwieldy motorhomes of the past, people are increasingly turning to their versatility for a short holiday or weekend break. We meet the brands leading the charge and the first-timers sliding behind the wheel.

In 2015, Jen Young and Jeff Cavins decided to sell their San Francisco home and set off on a year-long road­trip across the US. The idea was to live in an Airstream trailer – all in the name of market research. The couple had founded Outdoorsy, an online company billed as a marketplace con­necting owners of recreational vehicles (RVs) – the catch-all American term that refers to caravans, motorhomes and camper vans – with people want­ing to rent them. The trouble was that, at first, they didn’t get much traction. “We were rejected by virtually every investor we met,” says Cavins from his home in Austin, Texas. “We were laughed out of rooms.”

Fast-forward to today and the founders might be the ones having a laugh. Last year, Outdoorsy raised $50m (€44m) in funding and between the start of April and mid-May this year, demand across the site was up 1,500 per cent, according to Cavins. So why the turnaround? “We had to prove that there was a market out there,” he says. “And what people didn’t see is that there is a massive youth movement – and it’s a global, cross-cultural phenomenon.” 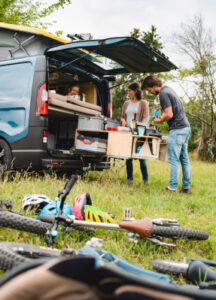 Outdoorsy, which claims that half of its users are under 40, hasn’t been the only start-up to tap in to this booming market. In Europe, Yescapa and Indie Campers offer the vehicles for hire in an attempt to capture a pool of young customers who want to expe­rience camper-van life without having to spend at least €40,000 to buy one. Not so long ago, any mention of the words “motorhome” or “RV” would conjure images of the retiree crowd manoeuvring unwieldy homes-on-wheels. But times are changing – and nothing seems to encompass that shift more than the downsizing in vehicles that’s happening around the world.

In an industry with a confusing number of technical specifications and terms to refer to different vehi­cles, much of the growth is happening in the van segment: vehicles that tend to be less than six metres long and not so heavy that you need a special licence to drive them (unlike those white-box homes-on-wheels). In Japan sales of camper vans shot up 63 per cent between 2012 and 2018; in the US, they are up 15.9 per cent year-on-year; and in Europe – where the total caravanning industry was worth €11.7bn in 2019 – vans have gone from less than 20 per cent of the motorised market to nearly 40 per cent in five years.

While the so-called “van life” lifestyle might have attracted its fair share of social media-primed influ­encers posing in their vehicles near a breathtaking stretch of coastline at golden hour, it’s also catching on with first-timers for different reasons. Last year, London-based Justin Hudson and his wife Joanne travelled with their baby around Ireland and con­tinental Europe in their Volkswagen Transporter. Like many people, he chose to buy a more affordable base vehicle and then picked a company to customise the interior for him, rather than purchasing a ready-to-go model such as the Volkswagen California, a European market leader. Germany’s

Kompanja, for example, converts a Renault Trafic to create a spacious camper with a larger bedspace at a lower price. As for Hudson, he says that he essentially chose to pay for the next five to 10 years of family holidays upfront – and apparently the free­dom is worth it. “It’s liberating,” he says. “There aren’t many times when you can wake up and say, ‘we can go anywhere’.” He adds that it’s a good investment: camper vans hold their value more so than cars.

With holiday trends shifting towards more active itineraries, a camper van makes sense. “Many people don’t want to book a hotel near a beach and stay there for three weeks,” says Mike Reuer, CEO of Germany’s Westfalia. “People are open to going to different places; being a bit more independent.” With travellers savouring their own space as coronavirus restrictions ease, and some reluctant to fly, the camper van again looks set to benefit. Westfalia is credited with creating the concept of the camper van through a relation­ship with Volkswagen that saw it build more than 400,000 vehicles for the automotive giant and pioneer every­thing from the pop-up roof to neat kitchen units. The firm’s converted Volkswagen T2 and T3 models are still the vehicles of choice for Californian surfer-types and the inspiration for many global “Westie” fan clubs.

Although the Volkswagen relation­ship ultimately ended, and Westfalia filed for insolvency in 2010, the com­pany is back to doing what it does best. According to Reuer, it is now focusing on “the details that make a difference”. Producing some 7,000 vehicles a year at its two factories in northwestern Germany, Westfalia builds for itself as well as making models including the Mercedes-Benz Marco Polo and the Ford Nugget for partners. Even the brands on the market that have nothing to do with Westfalia have clearly been influenced by its work: the US-made Winnebago Solis and Slovenian firm Adria’s Active both have a popping roof, simi­lar to those on Westfalia vehicles.

The European-produced Marco Polo is on the compact end of the camper van spectrum; you would be hard pushed to squeeze in a bath­room. Still, it is part of the indus­try’s fastest-growing subdivision. The compact idea, often using a pop-roof for sleeping space, is even starting to catch on in the US, which has a repu­tation for going big with RVs. “My grandparents had a massive RV,” says Richard Webber, general manager of marketing for Mercedes-Benz Vans USA. “It slept eight and I remember thinking, ‘Man that’s cool but why?’” Mercedes-Benz has clearly been asking that question too: this year it soft-launched the Metris Weekender, a pop-top camper. A collaboration with Seattle customisation outfit Peace Vans and built by Driverge Vehicle Innovations in South Carolina, the van also comes in a full camper con­version that includes a kitchen, sliding bed and Italian plywood finishes.

Peace Vans owner Harley Sitner can see why the pop-top concept has taken off; he calls it part of the “authenticity economy” and “people wanting an authentic experience; wanting more of a connection to the outdoor world”. And it isn’t just a US phenomenon. “Camping is booming in Japan,” says Norikazu Komatsu, founder of Japan’s Workvox, which designs and manufactures custom camper vans. “You can see the trend with people in Tokyo moving to the countryside or back to their home­towns. People in the city are craving to go back to basics or their roots.”

The popularity of compact vehicles can also be attributed to their adapt­ability. Small enough to manoeuvre into standard parking spaces, they work equally well for the school run, shopping trips or a dash to the coun­tryside to go hiking. Another reason why compacts and slightly larger camper vans have lured some of the traditional motorhome set (the aver­age age of camper van owners is still over 50, even if the number has come down) is because they’ve learned how to innovate. “There are a lot of incredibly intelligent solutions,” says Jost Krüger, secretary-general of the Frankfurt-based European Caravan Federation. “You know the Adria Twin has a shower; it’s not just a toilet and a sink. If you look on the outside you think, that’s pretty small…” In short, people still get the creature comforts associated with bigger vehicles.

As the camping and camper-van industries continue to boom, more mergers in the RV market seem likely. Slovenia’s Adria was acquired by France’s Trigano group in 2017, while US manufacturer Thor Industries bought another motorhome and caravan giant, Germany’s Erwin Hymer Group, last year, making it the world’s largest player. At the same time, with many people going down the DIY route, even the smallest of customisation outfitters are thriving.

Former naysayers are also warm­ing to the idea. Jørgen Amundsen, co-founder of Norwegian outdoor brand Amundsen Sports, is more used to epic hiking expeditions than hopping in a vehicle and camping – at least he was until he went to Botswana and slept in a pop-up tent on the roof of a 434. “I was sceptical because I hadn’t been into motorised travel,” he says. “But it grew on me and I’ve become quite fascinated by it.”