There’s nothing dry about desert architecture. At its best, it channels the spirit of its surroundings and takes inspiration from the light and the landscape. We hit the shimmering Arizona roads to take the temperature of a very particular built vernacular.

The arid terrain of southern Arizona’s desert presses up on the edges of Tucson. Here, not far from downtown, saguaro cacti, prickly pears and ocotillo trees abound – the latter’s branches springing into life after rain, growing bright-red flow­ers. Animals in these parts, a two-hour drive from the Mexican border, have mysterious names, such as the Gila monster and the coatimundi. And sundown is greeted by the howl of coyotes. Given this dramatic pan­orama, it’s little surprise that the region’s most successful residential architecture embraces an important sense of place. “For me architecture is space – and space already exists,” says Luis Ibarra, co-founder of Ibarra Rosano Design Architects, ceding his creative rights to the landscape.

Ibarra and his desert-architecture colleagues aren’t reinventing the wheel; in many ways they’re referencing ancient techniques and ideas. But as global ecosystems continue to fray and climate change becomes increasingly central to our lives, their ethos of respectful, responsible design that uses local materials is more important than ever. “If dining locally is not just a trend but is an extension of sus­tainable practices, then why wouldn’t that be true for buildings?” he asks.

Ibarra, who founded his studio with wife Teresa Rosano in 1999, drives us out to one of the firm’s most emblematic proj­ects: the Levin Residence, on the edge of the Saguaro National Park. Three cantile­vered concrete boxes connected by bridges have been built to allow flora and fauna to continue to flourish around it. Ibarra calls the home “a study in composition”: every facet of the residence has been created to help digest the desert scenery. “The beauty of this place is easy to destroy,” he says. 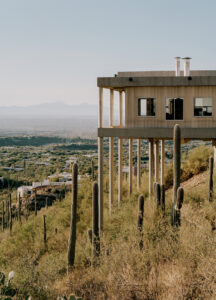 Ibarra learnt his craft from Judith Chafee, a figure who looms large over Tucson’s desert-architecture scene. A chain-smoking Yale graduate who died in 1998, she had arrived back in her native Tucson at the end of the 1960s after practising archi­tecture on the east coast inside the studios of Walter Gropius and Eero Saarinen. As well as setting up her own studio, she spent years teaching at the University of Arizona, where she garnered a reputation as an often blunt and exigent teacher – but someone who cared deeply. “She taught me to be more intentional,” says Ibarra.

Chafee was arguably the first to success­fully combine modernist principles with a southwestern vernacular. With a preference for function over form – exposed materials and a focus on minimal maintenance after completion – Chafee tailored her buildings to each location but also sought to minimise their environmental toll. The most imposing of her homes, the vast Rieveschl Residence in the foothills of the Coronado mountains, features thin columns conceived to rest lightly on the surrounding bedrock.

But it’s the Ramada House near the Santa Catalina Mountains, completed in 1975, that is undeniably her finest work. Raised above the whitewashed residence on columns is a wooden slatted second roof that diffracts light, creating brilliant shadow lines depending on the time of day. The ramada shading technique (the word borrows from Spanish and is particular to the southwest) is influenced by Native American designs. Chafee mastered light but she also got the perspective just right for the owner. “I like the fact that rooms are small and discreet,” she said.

Of all the students taught by Chafee, one figure in particular stands out: Rick Joy. His self-designed offices – seven buildings where glass and earth dominate – occupy a campus in the city’s Barrio Viejo, a colourful residential neighbour­hood that feels as though you’ve already crossed into Mexico. Maine-born Joy, who set up his firm in 1993 after a earlier music career, doesn’t refer to himself as a desert architect, given that he now has proj­ects spanning everywhere from Vermont and Idaho to Mexico City, New York and Turks & Caicos. But there’s little doubt of his relevance within the pantheon, nor of the fact that the environment has rubbed off on him (“I wouldn’t wear a bandana and drive an El Camino [pickup] in Maine,” he says).

Joy made a name for himself more than 20 years ago with his first Tucson project, Catalina House, a home built using rammed earth (a mixture of sand, gravel and clay among other materials) that honed what he calls his “planned imper­fection” style, allowing a building to age gracefully in tune with its environment. But it’s Desert Nomad that is the standout.

When we visit, the young German owners are lounging by the pool taking in the desert scenery. Behind them are three separate boxes that Joy calls “elevated  living and sleeping spaces and accessible via an outdoor path. Each of the modules, which are covered in plated steel that has taken on a warm patina with the pass­ing of time, has a different orientation to take advantage of the light and the view: the bedroom faces west, while the living room is sited towards the twinkling city lights. “This house has changed my perspective on architecture completely, especially how it coexists with nature in a harmonic way,” says one of its owners. Watching the city lights come up from the living room as dusk falls, it’s easy to understand what he means.

A large part of desert architecture’s con­tribution to responsible – and responsive – building is that it’s constructed with min­imum impact and low-maintenance ideals. In the case of Casa Caldera, designed by former Rick Joy employee Cade Hayes and Jesús Robles of Dust Architects, it’s also not that easy to find.

A remote residence with a bunker-like quality, it’s nestled deep in the high desert near the border with Mexico. Driving here, is a fascinating window onto the desert’s shifting landscape, as the saguaro disappear and are replaced by yellow grasslands.

Robles and Hayes have a diy ethos that means they also tackle building, furniture-making, welding and carpentry. Constructing Caldera involved hauling up two trailers and camping in a tent in January, when night temperatures dipped below freezing. Made using onsite-poured lava and cement, and built for an eccen­tric who trains falcons to kill local prey, a central hallway with a bedroom and living room on either side opens up to embrace magnificent eastern and western views.

Back at Dust’s studio and workshop in Tucson, Robles talks about the practice’s ongoing projects in New Mexico, California and Texas, alongside Tucson – all desert landscapes – and what it means to be a southwestern architect. “It’s taught us to be keen on the environment,” he says. “To have that high awareness about place, climate, culture and the natural and built environ­ments.” But it’s his partner Hayes who sums it up perfectly: “We get this place.”