Pork chops and promises are part of the race for the White House at that livestock-laden oracle, Iowa State Fair.

Kamala Harris, looking calm and col­lected, is being funnelled through the crowds at Iowa State Fair. Her campaign volunteers, wearing signature yellow T-shirts, are dotted among the throngs of people, while secret service men circle looking grumpy. Harris is on her way to what is arguably one of the most impor­tant election stops she will make in her bid to become the Democratic presiden­tial nominee: the Iowa Pork Producers Association stand. Once there she will dutifully pose with a freshly grilled pork chop on a stick, before the melee of cam­era-wielding journalists and curious fair­goers continues to the next photo op.

Every four years, during the convo­luted and costly presidential-election cycle, Iowa becomes the centre of the US political universe. Since 1972 it has been the first state in the union to vote in the primaries and caucuses process to elect the nominees for the Democratic and Republican parties (Iowans will hold caucuses on 3 February next year, even if the Republican one is a foregone conclu­sion given Donald Trump doesn’t have a serious challenger). That means that for this presidential cycle it’s the Democratic pack that is on a mission to woo the max­imum number of potential caucus-goers and get their respective campaigns off to a flying start; lose badly in Iowa and it can mean the end of the road. 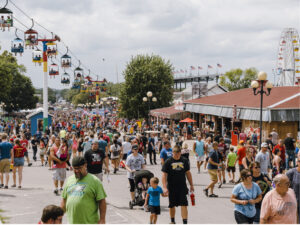 Of the staggering 3,000 presiden­tial events the state is expected to hold during the election cycle, Iowa State Fair – which takes place on the eastern edge of capital city Des Moines – is the cherry on the cake: a chance to make a bid for the votes of the rural US in the heart of the Midwest. It’s a tried-and-tested piece of political theatre, paying deference to the pork producers in a state with more pigs than people. Democrats also realise the importance of crisscrossing Iowa with the 2020 presidential election in mind. This is a key swing state, where Trump beat Hillary Clinton by nearly 10 percent­age points in 2016, while the Democrats in turn flipped two House seats in the 2018 midterms. The eventual Democratic nominee will be hoping to turn the state blue once more.

“This doesn’t happen in Virginia, which is also a swing state,” says high-school teacher Shannon Roth, surveying the fair spectacle alongside her husband Brandon. “It’s because Iowa goes first and it’s all about momentum. You don’t need to win Iowa – but you need to do well.” Trump decided to skip the event this time but Republican longshot Bill Weld and every Democratic hopeful added the fair to their list of campaign stops (Beto O’Rourke subsequently cancelled to be in his hometown of El Paso in the aftermath of a mass shooting there).

The largest event of its kind in the coun­try, Iowa State Fair welcomes some 1.1 million people over 11 days each year. Punters throng for agriculture events that include opportunities to milk a cow or assess the athletic qualities of a pig. Added to the mix are everything from rubber-chicken throwing competitions to dried-cowpat hurling, plus a beauty con­test for men’s legs. Wafting over the entire proceedings is the smell of frying oil and the chance to munch on everything from bacon-wrapped ribs to corn dogs (a frank­furter on a stick that has been battered and deep fried), the latter Bernie Sanders’ fair food of choice.

The main reason that politicians are in town is the Soapbox stage run by the town’s newspaper of record, The Des Moines Register. Candidates are given 20 minutes to make their pitch on a tiny platform decked with a couple of hay bales, while the crowd is encouraged to be “Iowa nice” and not heckle too much.

The day before Harris’s appearance, Texan hopeful Julián Castro had been perched on stage. As he glistened in the sunshine he was perhaps slightly disap­pointed to have been allocated a 09.00 slot during the fair, when crowds are thinner than later in the day. “Talk to your friends, family, neighbours and co-work­ers,” he implored, aware of not just the people in the crowd but the potential for having his message replicated and ampli­fied by both social media and the press ensemble. “There are probably about four Iowans in the crowd,” one cynical passer-by said. “The rest are press.”

What’s most fascinating about Iowa State Fair, and the Soapbox in particu­lar, is the access. In a modern US elec­tion calendar of silky-smooth campaign roll-outs heavy on high-production TV advertisements and scripted town hall meetings, glad-handing at a state fair seems almost archaic. But many believe it offers a chance to make a more genuine impression. “Even if you’re not asking a question of presidential candidates, you could easily be 10 or 20 feet away from someone who might be the next leader of the United States,” says The Des Moines Register’s politics editor Rachel Stassen-Berger, who comperes on the Soapbox stage. “That’s a very heady experience for a lot of people.” It’s also a prime forum for some candidates, who might not resonate with Iowans from afar, to make their campaigns connect. As lawyer Lydie Hudson – who has driven four-and-a-half hours from her home in Madison, Wisconsin – puts it, it’s a chance to “see who’s authentic”.

While the fact that you can walk into Iowa State Fair without a bag check (the fair introduced random searches for the first time this year) and come within touch­ing distance of some of the most powerful politicians in the US may seem bizarre, Iowan appearances are by no means restricted to the fairgrounds. Stassen-Berger says that candidates started to trickle through the state as early as last year and the paper, despite its modest circula­tion of just under 60,000, has allocated 14 reporters to follow them. Bernie Sanders dropped in on West Des Moines for 4 July celebrations this year, for example, while Democrats make regular stops in Clear Lake in the north of the state. “I can have handshakes and chats with candidates for six months living here,” says Jennifer Garst from Ames, north of Des Moines, who says she’s at the fair primarily for the weed identification competition. “A few months ago I had to run away from a can­didate because I didn’t know his name.”

For some, Iowa has an outsized impor­tance: a “flyover” state that is older and whiter than much of the rest of the US that suddenly becomes a coveted political prize. Independent pollster J Ann Selzer, who directs the much-watched Iowa Poll for the Register, argues that Iowans don’t vote according to identity politics (Barack Obama won the 2008 caucus and presi­dential election, while African-American candidates from Jesse Jackson to Alan Keyes have performed well here) and adds that the race has to start somewhere. “I will submit that Iowa may be the worst place to start,” she says. “Except for, per­haps, all the others.”

For proponents of the current system, Iowa allows for a level playing field: a state of just three million people where, due to the population size and lower media entry costs, candidates don’t need to spend California or New York-sized sums of cash to achieve equal penetration. “If candidates use Iowa well they’ll get better as a candidate,” adds Selzer. “Because when you’re seeing the same person and they’re asking the [same] question, you’d better get a better answer if it doesn’t go over the first time. If you’re just doing a TV ad you don’t necessarily get that kind of immediate feedback.”

While neighbouring Minnesota has switched to a primary for 2020 – a secret ballot vote in line with the majority of US states – there is little momentum for change in Iowa. At the Democratic caucus, registered party members gather in large spaces such as school gyms to openly discuss each choice before decid­ing on which candidate grouping to join (there will also be “virtual” caucuses over the phone for the first time next year). With several independents we spoke to at the State Fair confessing that having to register a party affiliation in order to vote puts them off, the numbers of those taking part in a caucus come February is expected to be low (just over 170,000 people turned out for the Democratic caucus in 2016).

Yet according to Selzer, Iowa is a state that “anyone can win”. And that, she says, means candidates aren’t about to ignore it any time soon. Meanwhile Iowa State Fair gives them access to just the sorts of people who might normally avoid more staid political events. Selzer points to the fact that Bernie Sanders was polling at just 4 per cent in Iowa at the start of the 2016 race but ended up losing the caucus to Hillary Clinton by less than half a percentage point.

This time around – and with the Iowa State Fair corn kernel poll proving a highly unscientific barometer for who may be the eventual Democratic nominee – it remains almost impossible to predict whether Elizabeth Warren’s high-octane Soapbox speech (one of the biggest crowd-draws along with Bernie Sanders) or Kamala Harris’s pronouncement that “Dude gotta go!” will edge them over the line. Or whether Joe Biden’s gaffe at a Des Moines side event, in which he clumsily announced that “poor kids are just as bright and just as talented as white kids”, will derail his campaign. What’s certain, however, is that the baby-kissing, junk-food-gobbling, family-photo-op-coveting political juggernaut rolling through the state at the moment isn’t about to halt any time soon. As Trump-supporting fairgoer David Thurston puts it, “We give politi­cians their start.”

Caucuses explained
While most states hold primary elections to select nominees for each party, Iowa’s vote – like several others, including Nevada, Alaska and Wyoming – doesn’t involve a traditional ballot box. The Democratic party process sees people gather in large spaces to discuss candidates. Attendees then peel off into groupings for the vote. Any candidate coming in with less than 15 per cent is eliminated, with voters in those groupings given the chance to choose a new candidate who meets the threshold. Once the procedure is complete (it can take a couple of hours), tallies are taken and each candidate is allotted a proportional number of delegates. They go towards his or her bid to win the 1,885 delegate votes needed to clinch the party nomination – chosen at the party convention in July – in the first ballot. The Republican party caucus in Iowa, meanwhile, is a straw-poll system, with a candidate needing a total of 1,237 delegates to eventually win the nomination. Following Iowa’s caucuses on 3 February, the action moves to the New Hampshire primaries on 11 February.