As developers eye New York’s Gowanus Canal, Ed Stocker takes to the water in one of the city’s grubbiest but most interesting corners.

Conducting an interview on a canoe isn’t easy. An audio recorder is finely balanced on one of the vessel’s wooden crosspieces. Whenever I switch to paddle on the oppo­site side I have to make sure that water doesn’t splash on it. Then there’s the fact that my subject – architect and urban plan­ner Owen Foote – is constantly moving.

In his spare time Foote is treasurer of the nonprofit Gowanus Dredgers Canoe Club in Brooklyn. Its base is hardly idyllic; toxic dumping-ground might be a more apt description. The Gowanus Canal – a bene­ficiary of a federal environmental clean-up “superfund” – is one of the most-polluted waterways in the US. From our watery vantage point we drift past warehouses and a site where the Big Apple’s street-food trucks are stored at night. Along the way Foote explains the history of heavy indus­try leaking pollution into the canal, not to mention the city’s overwhelmed overflow system, which means that sewage is often flushed directly into the water. 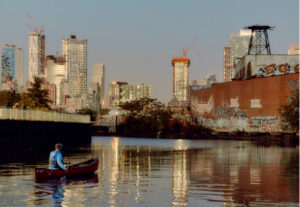 Canoeing on such a waterway might seem like madness but Foote, who co-founded Gowanus Dredgers, first saw the area’s potential in its darkest days. The club was born when the city fixed the canal’s pumping station in 1999; it had been out of service for almost 40 years. Its aim is altruistic: if people start to value the water­way they might treat it better. “Nothing positive was ever discussed about it and, as an urban planner, I thought we should be talking about it differently,” he says. From a ragtag operation with two boats, the club now has a dozen canoes and its own space.

Over the next decade the neighbour­hood and the waterway are set to change beyond all recognition as more buildings are erected, including thousands of apart­ments. Dredging bulkheads are being installed and the city has proposed a zoning framework; the area is set to switch from manufacturing to mixed-use. This has prompted heated debate about place-making, public space and what Andrea Parker, executive director of advocacy group Gowanus Canal Conservancy, calls “making sure that usages are what the larger neighbourhood needs”. Foote wants to talk to every residential developer work­ing on the canal to ensure that they think about what would make public space on the banks of the Gowanus enjoyable.

It’s now dark and Foote says good­bye with a parting Gowanus handshake: touching elbows instead of clasping palms; he tells me to wash my hands thoroughly as soon as I get home. The clean-up isn’t finished yet.