South American heads of state dashed the hopes that Paraguay’s president, ousted in a fast-track impeachment last week, will be reinstated as the country’s chief executive.

While two regional groups on Friday unanimously condemned a lack of democracy in Paraguay after Fernando Lugo was removed from office in a matter of hours, and they banned the country from regional forums until new presidential elections are held next year, they failed to impose economic sanctions on Paraguay, giving the architects of Mr. Lugo’s ouster little incentive to backtrack. 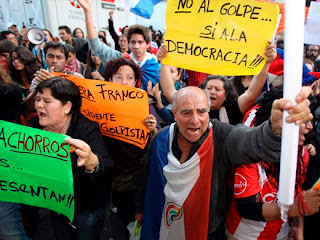 Defending the decision, Buenos Aires-based political scientist Atilio Boron says it was the correct move. “The suspension leaves Paraguay on the margin of the legislative and executive bodies within Mercosur and Unasur,” he explains. “Thankfully the presidents decided against economic sanctions. The aim isn’t to punish all Paraguayans.”

In special meetings of the trade bloc Mercosur and the political bloc Unasur, in Mendoza, Argentina, Friday, leaders from across the region revoked Paraguay’s membership from both bodies until presidential elections next year.

Last week’s impeachment process in Paraguay – which many congressmen and analysts in the country have supported as part of a legal process enshrined in the Constitution to tackle a president “performing poorly” – was widely condemned across political spectrum, from Bolivia’s Evo Morales to Chile’s right-leaning Sebastián Piñera. Many commentators referred to it as an institutional coup.

But it has been the left-leaning leaders of South America, headed by Venezuela’s Hugo Chávez, that have most vociferously condemned the events in Paraguay, rankling Paraguayan leaders. Now Venezuela, which had been agitating to join Mercosur – the trade grouping that comprises Brazil, Argentina, Uruguay and, until yesterday, Paraguay – has been invited in. The proposal had been repeatedly blocked by Paraguay’s right-leaning parliament. Paraguay’s suspension from the group cleared the way for the oil-rich nation’s fast-track membership by the end of next month.

Lugo, a former priest and Paraguay’s first leftist leader who came to power in 2008, was removed from office last Friday within 24 hours after an impeachment trial was brought against him. The opposition-led Chamber of Deputies and Senate overwhelmingly approved the nine charges for his “poor performance of duties” as president.The catalyst for the impeachment, attempted on previous occasions, was the standoff between police and landless peasants in Curuguaty, eastern Paraguay, two weeks ago that left 17 people dead – both peasants and police. Lugo, who maintains close links to the landless movement, was accused of inciting the protesters.While Lugo’s election was widely hailed across Paraguay, as it broke 61 years of rule by the Colorado Party, more than 30 of them under the Alfredo Stroessner dictatorship, he lost support among most sectors. Critics accused him of being passive and ineffectual as a leader.His administration was also marred by personal drama, including a scandal involving children he fathered as a clergyman.

Lugo’s power base was always weak, forming a coalition with around 20 different parties, including the right-leaning Liberals, meaning he was never able to push through the reforms he wanted.

The toppled president was constantly at odds with Mr. Franco, his Liberal vice president, who has since assumed the presidency. Earlier in the week, the new head of state said Franco would refuse to acknowledge Mercosur and Unasur’s findings.

For many commentators, events in Paraguay echo the coup in Honduras in 2009 when regional bodies such as the Organization of American States (OAS) failed to react effectively.

For Mr. Boron, Honduras didn’t have the institutions capable of facing up to the crisis there. “Honduras is in Central America and not a member of Mercosur or Unsaur,” he says. “There was no mechanism or body there able to impose [political] sanctions. It’s interesting to note that the US immediately recognized the new government in Honduras, but so far, there has been no official recognition of Federico Franco’s government.”