It's late afternoon and the sultry heat of the day is beginning to diminish. Young people circle the plaza on scooters, eyeing each other up as they cross paths. Oblivious to the sexual tension, a sloth – the most leisurely of tropical creatures – surveys the scene from a tree in the middle of the square while chewing slowly on a leaf.

Trinidad, in Bolivia’s north-eastern lowlands, not far from the border with Brazil, feels a million miles away from the Andean culture that dominates the South American country’s politics and culture. Capital of the province of Beni, Trinidad sits on the banks of the Marmoré, in an area of vast wetlands, jungles and rivers that flow into the Amazon further north. And the star resident of these waters is the bufeo, a beautiful pinky-grey river dolphin.

There are several varieties of South American river dolphin, the best- known being the pink boutu, a popular draw on Amazon river trips in Brazil. Their less startlingly pink Bolivian cousin was formally discovered by French naturalist Alcide d’Orbigny in 1832: he named it inia boliviensis, borrowing inia from the word he’d heard indigenous people use. Like many facets of life here, the creature comes cloaked in myth. When a handsome stranger appears at a local fiesta, he is said to be the bufeo in human form – dancing all night long and seducing women. 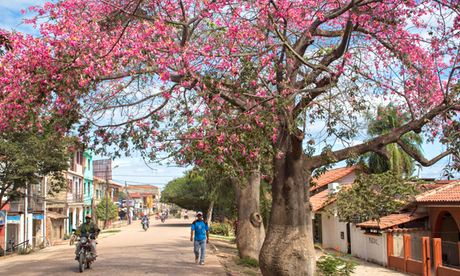 The beauty of this wilderness is that tourism is in its infancy here: you’ll share your dolphin sightings with relatively few outside visitors. Some miles west of town, at Puerto Ballivián on the Ibare river (a tributary of the Marmoré), is a settlement of wooden houses on stilts at the edge of the jungle. We’re doing a day cruise, within a 25,000-hectare reserve, to spot the dolphins, which are unique to the area and protected under law since 2012.

At the helm of our little motorboat is Roger, a fiftysomething local with salt-and-pepper hair and a broad grin. As we chug down river, he points out tarope plants growing in the water which, he says, act as a natural filter.

“It’s clean here,” he adds, “but the biggest threat to the dolphin is contamination near urban centres.”

We spot a pair of parabas – gold-and-blue parrots – in the trees and hear the thunderous roar of a group of elusive monkeys in the distance. But the dolphin is the star attraction.

The first one we spot teases us, revealing just parts of its body, from the blowhole and beak to a flipper. We play a leisurely game of cat-and-mouse, spotting it in the distance, edging nearer and then watching it disappear, only to surface again further away moments later. Sightings are almost guaranteed here: there are plenty of bufeos in this part of the river, and there’s something mesmerising about the graceful way the dolphin, one of several we see, glides just below the water’s surface.

While spotting a dolphin in the water is pretty much a given, how much you’ll see of them – and whether they’ll jump out of the water – depends on patience and luck. But there’s plenty to see if they’re not playing. The trees are full of birds (a mind-boggling number of species), including toucans, rare jacamars and herons. Its astonishing to see so many weird and wonderful creatures so easily, but that is a major part of Beni’s appeal – its untapped feel and sense of being in a place few people even know exists.

• The trip was provided by HighLives (020-8144 2629, highlives.co.uk), a South America specialist which has a seven-day tour of the Bolivia Lowlands, including the dolphin route, from £1,230pp, including transfers but not international flights. Flights were provided by Air Europa (0871 423 0717, aireuropa.com), which flies from Gatwick to Santa Cruz via Madrid from £700 return