Paraguay’s establishment was shaken by the election of Fernando Lugo as president but his dubious removal after four years in power has failed to silence the outspoken former Catholic bishop. He spoke to Monocle on the eve of new elections scheduled for April.

See the PDF
1
1
Fernando Lugo swept to Paraguay’s presidency in 2008. The former priest was everything the establishment wasn’t: progressive, leftist and prepared to shake up the impoverished nation’s archaic institutions. He survived four years and then, in the blink of an eye, he was gone.

Last June, Lugo was impeached and removed from office for “poor performance in his duties” following clashes over lands rights in the southern district of Curuguaty that left 17 dead. Brazil and Argentina called his ousting a coup, while Chilean leader Sebastián Piñera denounced a lack of due process. 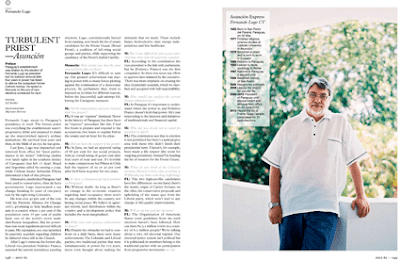 Diminutive, landlocked Paraguay had been used to conservative, often de facto governments. Lugo represented a sea change, breaking 61 years of one-party rule by the right-wing Colorados. He won over 40 per cent of the vote with his Patriotic Alliance for Change (APC), promising to help landless peasants in a country where 1 per cent of the population owns 77 per cent of arable land, one of the world’s worst land distribution inequalities. But his powerbase was weak; legislation proved difficult to pass. His reputation, too, was tarnished by paternity scandals regarding children he fathered when still in the Church. After Lugo’s removal, his former ally, Liberal vice-president Federico Franco, assumed the interim presidency pending elections. Lugo, constitutionally barred from running, now heads the list of senate candidates for the Frente Guasú (Broad Front), a coalition of left-wing social groups and parties, while supporting the candidacy of the Front’s Aníbal Carrillo. Monocle: How would you describe your removal from office in June?
Fernando Lugo: It’s difficult to sum up. Our greatest achievement was staying in power with so many forces plotting against the continuation of a democratic process. In parliament they tried to impeach us 23 times for different reasons, before the [successful] 24th attempt following the Curuguaty massacre. M: Did the impeachment and your removal lack ‘due process’?
FL: It was an “express” dismissal. Never in the history of Paraguay has there been an “express” procedure like this. I had five hours to prepare and respond to the accusations; two hours to explain before the senate; and an hour for the pleas.M: Did you have the support of the people?
FL: In June, we had an approval rating of 68 per cent for our social projects, with an overall rating of 49 per cent after four years of wear and tear. It’s horrible to make comparisons but Piñera in Chile had the support of 20 or 30 per cent after he’d been in power for two years.M: Is there a fundamental land problem in Paraguay?
FL: Without doubt. As long as there’s no change in the economic situation regarding land occupancy there won’t be any changes within the country, nor lasting social peace. We believe in agrarian reform, land distribution within the country and a development policy that includes the most marginalised.M: What were your greatest achievements in power?
FL: Despite the obstacles we had to confront on a daily basis, there were many achievements. The Colorado and Liberal parties, two traditional parties that were simultaneously in power for 110 years, never even thought about making the demands that we made. These include Itaipu hydroelectric dam energy independence and free healthcare.

M: But it was difficult for you to pass laws. And then there were the paternity scandals.
FL: According to the constitution the vice-president is the link with parliament, but he [Federico Franco] was the first conspirator. So there was never any effort to approve laws initiated by the executive. There was more emphasis on creating the idea of paternity scandals, which we clarified and accepted with full responsibility.

M: How would you analyse the current Franco administration?
FL: In Paraguay it’s important to understand where the power is, and Federico Franco doesn’t hold that power. He’s just responding to the interests and initiatives of multinationals and financial capital.

M: Why did you decide not to stand for president in April?
FL: The constitution says that re-election is not permitted but there’s a judicial grey area with those who didn’t finish their presidential term. I haven’t, for example, been made a life senator [the norm for outgoing presidents]. Instead I’m heading the list of senators for the Frente Guasú.

M: What do you think of the Colorado nominee, Horacio Cartes, who, according to WikiLeaks, has links with drug trafficking?
FL: The two high-profile candidates have few differences: on one hand, there’s the murky origin of Cartes’ fortune; on the other, the conservative proposals and upholding of the status quo from the Liberal party, which won’t lead to any change or life-quality improvements.

M: Will we see free and fair elections?

FL: The Organization of American States (OAS) guidelines from the 2008 elections haven’t been followed. How can there be 3.5 million voters in a country of 6.5 million people? We’re talking about a very old electoral register. Our electoral justice system isn’t political but it is politicised; its members belong to the traditional parties with no participation from progressive movements
Share Tweet Share Pin