Uruguay’s Senate approves abortion bill: Will there be a ripple effect?

Uruguay’s Senate approved a bill legalizing first-trimester abortions, and the president says he will sign it. Abortion is still a political hot potato in Latin America, but some say such legislation could spread.

Uruguay paved the way for one of the most far-reaching abortion rights laws in Latin America this week when its Senate voted to legalize the procedure during the first trimester of pregnancy. The controversial decision has sparked speculation as to whether regional neighbors – from liberal Argentina to conservative Chile – could follow suit. 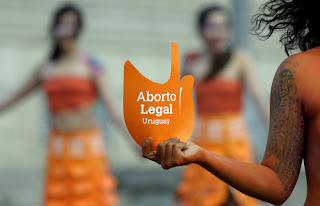 Uruguay’s Senate vote on Wednesday put the southern cone nation “at the forefront of countries that have established [these] rights,” says Véronica Pérez, a political scientist at Montevideo’s University of the Republic. President Jose Mujica, a former leftist guerrilla, is expected to sign the bill into law.

Though Uruguay is already considered one of the most liberal countries in the region – it was one of the first Latin American nations to officially separate the state from the Catholic church in the early 1900s, and it recently floated the idea of legalizing marijuana – the abortion debate has been met with considerable opposition.This week’s vote was the third time the bill has been introduced in the Uruguayan Parliament and the Senate’s final vote tally of 17 in favor and 14 against shows how divisive the issue remains. A previous bill was approved in 2008, but then-President Tabaré Vázquez vetoed it.“Legislation is a long, long process in a region where very few countries have decriminalized abortion,” says Marta Alanis, a member of Argentina’s National Campaign for the Right to Abortion, based in Córdoba.

The regional climate
In Latin America, abortion is permitted only in Mexico City and Cuba. Uruguay’s larger neighbors, Brazil and Argentina, continue to ban the procedure unless the pregnancy is the result of a rape or the woman’s life is in danger. In Chile, abortion is illegal under all circumstances.

The Catholic church and the powerful pro-life lobby continue to be the major obstacles to change in legislated reproductive rights in Latin America. But politicians, too, are reluctant to tackle such a polemical hot potato.

“Abortion isn’t an issue that political parties use to differentiate themselves in Latin America,” says Ms. Pérez, the political scientist. “This isn’t an issue that forms part of their campaigns. In reality, these are ideas that tend to divide the electorate and different social groups. There isn’t a consensus.”

In contrast to divisions among politicians, however, a September survey by the polling firm CIFRA found that 52 percent of Uruguayans would vote in favor of the law if they could. Some 34 percent said they would vote against it. And the legalization movement is gathering strength in neighboring countries, including Argentina, where a parliamentary debate is likely to take place next year.

The topic has dominated Argentine media since March, when the Supreme Court declared that non-punishable abortions did not need to be approved by a judge. But problems remain and earlier this month a judge stepped in to stop a victim of sexual abuse from having an abortion in a Buenos Aires hospital.

But Uruguay’s new law has been criticized by some pro-choice groups for not going far enough: The law stipulates that women have to meet with a board of medical experts and explain the “economic, social, family, or age difficulties that in her view stand in the way of continuing the pregnancy,” according to the bill. The board will explain the alternatives and the woman will then have five days to reflect on her decision. The bill’s conditions, some argue, don’t allow a woman to make her own free decision.

Ripple effects?
Despite its drawbacks, the law remains a landmark decision in Latin America, and is something pro-choice campaigners hope will have regional ripple effects.

But the road ahead may be long: Although there have been many advances in terms of sexual rights in Latin America – most notably with Brazil and Argentina legalizing same-sex unions in 2004 and 2010, respectively – abortion is extremely divisive.

“In terms of the reactions and conflicts [abortion and same-sex marriage] provoke in society,” pushing same-sex unions isn’t the same as advocating the legalization of abortion,” says Pérez. “For same-sex marriage or gay adoption, for some men it’s like ‘that’s OK, I don’t like it much but it doesn’t affect my rights.’ On the other hand, a woman’s decision to interrupt her pregnancy strikes at the core of masculine decision-influencing power.”

For Ms. Alanis, the abortion rights campaigner, the cultural and historical similarities between Argentina and Uruguay mean that abortion legalization in Uruguay is bound to influence her country.

“I think we’ll see a decriminalization of abortion before President Cristina Fernández de Kirchner finishes her mandate [in 2015],” Alanis says.

But, if the abortion agenda is progressing in Argentina and Brazil, then Chile remains the exception, widely held to be the most conservative country in the region, where divorce was only legalized in 2004.

“Uruguay legalizing abortion or Argentina granting same-sex marriages are solid international examples that show that in Chile we’re not mad if we want to approve divorce, gay marriage, or abortion,” says Cristóbal Bellolio, an academic at Santiago’s Adolfo Ibáñez University.

The Uruguay ruling helps, Mr. Bellolio says. “What we’re doing is basically following a universal tendency [in legalizing liberal policies] that, far from destroying society, does exactly the opposite.”

Pérez says regional change is on the horizon. “Experience has shown us that legislation tends to happen with one country following another,” she explains. “If you look at sexual equality laws in Latin America, they’ve tended to advance in waves, too, with countries copying each other.”