See the PDF
1
1
If you live in Latin America, by 2020 you will be three times more likely to die on the roads than in a high-income country, according to theWorld Health Organisation (WHO). As the region’s rapid economic development pushes more vehicles on to highways, road deaths are spiralling upwards.

WHO statistics show that in 2000 there were 26.1 road deaths per 100,000 people in Latin America and the Caribbean. This is predicted to rise to 31 per 100,000 by 2020, the worst rate in the world and more than triple the predictions for the world’s richer nations. 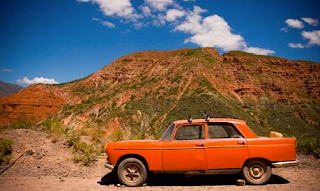 Bad roads, dangerous driving and a lack of investment in safety measures undoubtedly fuel such high death rates, and the poor quality of vehicles is also a major contributor to the deaths of more than 100,000 people across the region every year.Since 2010, crash tests on leading car brands sold across the region, carried out by automotive standards body Latin NCAP – launched with the support of the Inter-American Development Bank and the FIA Foundation – have exposed some disturbing truths. Their assessment of the region’s top selling cars revealed that many models were being sold without basic safety devices such as anti-lock braking systems (ABS) and airbags, as well as bodies that crumple far too easily on impact.

“I believe the vehicles in Latin America and the Caribbean are 20 years behind their counterparts in Europe and the US,” says Nani Rodríguez, executive secretary of Latin NCAP, from her office in Montevideo, Uruguay.

Superficially, there does not seem to be any difference between Latin models and those sold in other parts of the world. “Take the Peugeot 207, for example,” she continues. “If you look at it from the outside, it’s exactly the same as the one you’d buy in France. But when we tested it, the results weren’t the same. As it’s completely made in Latin America, there are differences with the components, with the metals and a whole host of other factors.”

What this effectively means is that someone buying a car in Latin America is significantly less protected on the roads than someone buying the same model in Europe or the US.

Rodríguez says the problem is that Latin American countries, in their rush to develop, have not been stringent enough on imports or their own fledgling car industries. Because of the lack of legislation, cars that would not be permitted in other markets are allowed on the roads.

It is a vicious cycle of governments not doing enough to improve standards and manufacturers providing the bare minimum. Buying a car in Latin America represents a significant investment for some customers, meaning they often go for the cheapest – and least safe – option.

Safety features tend to be bundled up with luxury add-ons. “So if you want airbags,” says Rodríguez, “they might be sold alongside air-conditioning, bigger tyres and leather upholstery.” Latin NCAP wants to see safety as standard, instead of the consumer being led to believe that airbags or ABS are a luxury instead of a basic safety requirement.Rodríguez says testing has already helped to push through improvements – but that the poor results in the past two years should serve as a stark warning that the region needs to “wake up” and demand more from governments. Alongside improving vehicle safety standards, driving ability and road layout need to be tackled.
Progress has begun, led by the region’s largest economies. Argentina and Brazil are to introduce front airbags and ABS on all new vehicles from 2014.Yet the challenges are vast – especially given the several decades it will take to replace the fleet on Latin America’s roads – and Rodríguez believes the results from this year’s testing, due around November, will “still be pretty similar” to previous years.For David Ward, secretary general of Global NCAP, headquartered in London, change is never immediate. “These things take a lot of time,” he says. “In one sense, I’m impressed by how quickly Latin NCAP has made progress. I was involved with the creation of Euro NCAP 15 years ago and it took quite a few years before the car manufacturers were willing to co-operate. But in Latin America they were on board almost immediately.”

NCAP’s south-east Asian branch is now preparing to crash test vehicles for the first time in Malaysia in its bid to improve safety standards in a part of the world with similar problems on its roads. Asia still suffers the highest number of road accidents in the world. Driving through the changes now could make a big difference in the future.