Naval vessel impounded for two and a half months returns to triumphant homecoming.

See the PDF
1
1
Thousands of flag-waving Argentinians welcomed home the ARA Libertad this evening, the naval vessel impounded in Ghana for two and half months at the request of a US “vulture fund” that claimed it was owed millions of dollars in outstanding payments by the South American nation.

In a specially organised event in the city of Mar del Plata, headed by President Cristina Fernández de Kirchner and featuring brass band music, fireworks and stunt planes flying overhead, the government attempted to turn what had originally been viewed as a national humiliation into a triumphant homecoming. 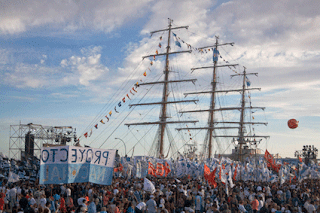 As the vessel edged towards the naval base where it docked, an announcer hailed the return as a triumph of “dignity and sovereignty”.“I think it’s great the boat has come back,” said Abél Maranzana, 51, a newspaper seller just off the main beach, “because vulture funds have always pressurised and abused Argentina. It’s good to see that the boat hasn’t been handed over to those people.”Not even a planned anti-government cacerolazo near the naval base – a form of street protest involving banging pots and pans dating back to the 2001 economic crisis that has made a come back in recent months as Fernández de Kirchner’s popularity has slid – could dampen the spirits of the holidaymakers, politicians and social groups in attendance.

Members of the opposition were quick to accuse the government of hijacking the homecoming for political gain. “All Argentinians celebrate the return of the Libertad,” said ex-presidential candidate Ricardo Alfonsín on his Twitter account. “But as a citizen, too, it pains me how the government is making use of the arrival.”

The ARA Libertad’s repatriation port had been chosen to ensure maximum exposure. Mar del Plata is the country’s most popular seaside resort that welcomes thousands of domestic holidaymakers every January.

The vessel, on a routine stopover, was held in the Ghanaian port of Tema on October 2 after the High Court there backed the claims of US hedge fund NML Capital – headed by billionaire Paul Singer – demanding up to US$1.6bn from the Argentinian government in debt it amassed selling bonds.

The stopover in Ghana was a ill-advised last minute change to the itinerary and the scandal left a large dent in Argentina’s pride, leading to the resignation of Navy chief Carlos Alberto Paz.

Argentina argued that the detention, used as leverage by NML to try and regain its money, was illegal and took the dispute to the Hamburg-based International Tribunal for the Law of the Sea. The body subsequently ruled in Argentina’s favour, ordering the immediate release of the frigate.

On December 18 Fernández de Kirchner announced that the three-mast sail ship would be returning to the resort of Mar del Plata, popular with middle and working class Argentinians. “So that all Argentinians can see the Frigata Libertad [Freedom Frigate], which also represents your freedom,” she said.

Argentina refers to NML Capital and similar companies as vulture funds due to their methods of preying on developing, often heavily indebted, economies largely in sub-Saharan Africa and Latin America.

NML originally bought cut-price government bonds back in 2000, a year before the nation’s historic default. Instead of entering into Argentina’s debt restructuring initiatives in 2005 and 2010 – when financiers were offered a fraction of their original investment – NML has looked to pursue the full amount it claims it is owed, plus interest, through international courts.

The Argentinian government has taken a hard-line in public against holdout investors and in October Cristina Fernández de Kirchner claimed that she would refuse to repay even a dollar to the so-called vulture funds.

In political circles the tone has been more moderate, with suggestions the government plans to reopen its 2010 restructuring negotiations with holdouts prepared to accept the same conditions as other bond buyers.

At the end of November, New York judge Thomas Griesa ruled that Argentina was obliged to make repayments to holdouts, a ruling that could have led to Argentina defaulting on its other repayment obligations. An appeals court granted the country an emergency stay of order until February 27.

After the Mar del Plata celebrations, the president will make a swift visit to Havana, Cuba, to check on the ailing health of Venezuelan ally Hugo Chávez, before beginning a tour of the UAE and Asia.

According to local newspaper reports, Fernández de Kirchner is renting an English private jet for her trip, instead of using the official Tango 01 plane, keen to avoid another high profile run-in with vulture funds on foreign soil.