Carlotto leads grandmothers who hunt for their grandchildren ‘stolen’ by Argentina’s military decades ago.

See the PDF
1
1
Estela de Carlotto isn’t like most grandmothers. Instead of easing herself into retirement and enjoying the slower pace of life it affords, she remains a dogged workaholic.
Every weekday she rises early without fail in order to make the 70-mile round trip from her hometown of La Plata to an office in the Argentine capital, Buenos Aires. 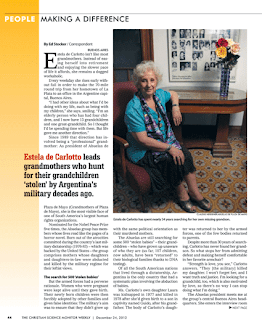 “I had other ideas about what I’d be doing with my life, such as being with my children,” she says, smiling. “I’m an elderly person who has had four children, and I now have 13 grandchildren and one great-grandchild. So I thought I’d be spending time with them. But life gave me another direction.”

Since 1989 that direction has involved being a “professional” grandmother: As president of Abuelas de

Plaza de Mayo (Grandmothers of Plaza de Mayo), she is the most visible face of one of South America’s largest human rights organizations.

Nominated for the Nobel Peace Prize five times, the Abuelas group has members whose lives read like the pages of a horror novel. Born out of the atrocities committed during the country’s last military dictatorship (1976-83) – which was backed by the United States – the group comprises mothers whose daughters and daughters-in-law were abducted and killed by the military regime for their leftist views.

The search for 500 ‘stolen babies’
But the armed forces had a perverse rationale. Women who were pregnant were kept alive until they gave birth. Their newly born children were then forcibly adopted by other families and given false identities: The military’s aim was to ensure that they didn’t grow up with the same political orientation as their murdered mothers.

The Abuelas are still searching for some 500 “stolen babies” – their grandchildren – who have grown up unaware of who they are (so far, 107 children, now adults, have been “returned” to their biological families thanks to DNA testing).

Of all the South American nations that lived through a dictatorship, Argentina is the only country that had a systematic plan involving the abduction of babies.

Ms. Carlotto’s own daughter Laura was kidnapped in 1977 and killed in 1978 after she’d given birth to a son in captivity named Guido, after his grandfather. The body of Carlotto’s daughter was returned to her by the armed forces, one of the few bodies returned to parents.

Despite more than 30 years of searching, Carlotto has never found her grandson. So what stops her from admitting defeat and making herself comfortable in her favorite armchair?

“Strength is love, you see,” Carlotto answers. “They [the military] killed my daughter. I won’t forget her, and I want truth and justice. I’m looking for a grandchild, too, which is also motivated by love, so there’s no way I can stop doing what I’m doing.”

The Abuelas president meets me at the group’s central Buenos Aires headquarters. She enters the interview room with slow, considered steps. But when she sits down and fixes her gaze, her sharpness and determination are undeniable.

Carlotto, who used to be headmistress at a school, says she feels comfortable in her role and all that it entails, from having to deal with the emotional fallout of a nieto (grandchild) who has come to the Abuelas with doubts about his or her identity to meeting heads of states or being invited to functions by human rights groups around the world.

‘A tireless fighter for human rights’
She also recognizes that what she does isn’t for everyone. Other grandmothers have either found their grandchildren or want to take a back seat role. Or they simply don’t have the energy that Carlotto continues to show. (Mariela Belski, executive director of Amnesty International Argentina, calls her a “tireless, committed, and persistent fighter for human rights, and the struggle’s most emblematic voice.”)

“There aren’t any more grandmothers that want to do the work that I do because I dedicate 24 hours a day to it,” she says. “There were grandmothers that didn’t want to become president or couldn’t because of work commitments. I was able to retire because of my husband’s work. So I had the time but also the character – I have a leadership personality.”

Carlotto’s teaching career has clearly helped in her work. Both she and the rest of the Abuelas have had to help nurture and then rebuild a polarized Argentine society licking its wounds from years of horrific crimes after the return to democracy in 1983.

The Abuelas president admits that “we’ve done a lot of teaching” over the years. Her organization tirelessly campaigned against laws from the 1980s and ’90s that pardoned most of the dictatorship’s henchmen (the laws were repealed in 2003). It also set up a DNA bank (the world’s first) in 1987 to help find missing grandchildren, and it continues to take an active role in ongoing human rights trials against former military officials.

Carlotto talks with utter poise. Wearing her trademark pearl earrings, she comes across as an eloquent and elegant señora, forced by her circumstances to relive a terrible past.

“Estela has an utterly sweet character,” says Guillermo Perez Roisinblit, one of the 107 grandchildren (now an adult) who have discovered their real identities through Abuelas. “And all this despite the troubles she’s had to deal with in her life, including the kidnap and murder of her daughter Laura and the nearly 34-year search for her grandson Guido.

“Yet despite all this, she still wants to help other grandmothers with the same spiritedness as ever, and without succumbing to hatred, resentment, or a desire for revenge.”

Being a public figure isn’t always easy, Carlotto says, but the warmth that people show her in the street helps her keep going. Sometimes people want to have their photo taken with her, she adds, as if she were a film star (in fact, her life was made into a movie last year, “Verdades verdaderas,” or “Real Truths,” directed by Nicolás Gil Lavedra).

Despite the affection that a large part of Argentine society feels toward her and the Abuelas, there are still people who want to silence her bold voice, especially those with links to the dictatorship. On Sept. 20, 2002, in the early hours of the morning, Carlotto was home alone in her house in La Plata when it was peppered with gunshots fired from a speeding car. She was unharmed, but the attempted murder now means she has a policeman at her door 24 hours a day, and she travels with bodyguards.

“Look, I’m not afraid,” Carlotto says defiantly, “firstly because the worst has already happened to me: My daughter was killed. And secondly because the bullets they tried to fire at me are the same that killed my daughter. The same people didn’t fire them but they showed the same murderous mind-set.”

Times are changing, however. The nature of the Abuelas organization is different now, she says. A father and a grandchild are now involved in the day-to-day running of it. It’s the latter and his fellow “brothers and sisters,” as she refers to them, who will continue the search until all 500 are found, she says.

‘It’s about a triumph of truth over lies’
In October, Abuelas de Plaza de Mayo celebrated its 35th anniversary with speeches, laughter, and music at a Buenos Aires theater. The group has come a long way since those perilous first few years when its members were unsure of what they were doing and where it would lead – and when showing any sort of defiance of military rule was a highly dangerous activity.

“Sadness is something we’ll have buried deep within us forever,” Carlotto says, “but we’re able to appreciate our achievements. Every grandchild that we find is giving freedom to someone who was living as a slave, so that they can recover their rights, their identity, their history, and their family.