For victims of Argentina’s Dirty War, chance for justice

Julio Poch, a former naval aviator, allegedly confessed to colleagues at the Dutch airline where he worked about his role in the ‘death flights’ over the Rio de la Plata.

See the PDF
1
1
Graciela Palacio Lois’ husband never came home from his Sunday meeting. At first she convinced herself everything was fine, but when he didn’t show up for work the next day, reality began to set in.

Thirty-six years ago, Ricardo Omar Lois became another victim of Argentina’s Dirty War — kidnapped and “disappeared” without trace by the military junta. 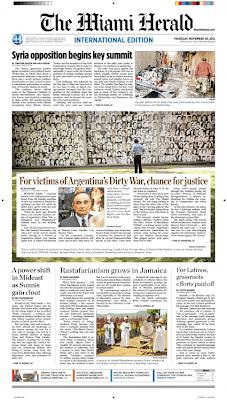 Lois, 62, has been forced to relive that dreaded November day when her world turned upside down, serving as a witness in Argentina’s largest ever human rights trial. It started Wednesday at Federal Court Number 5 in Buenos Aires.In the courtroom, Graciela, now a human rights activist, will come face-to-face with those accused of playing a part in her husband’s death. Despite the passage of decades, his memory is kept alive in several black-and-white photos in her office. They show Ricardo frozen in time at 23, his age when he vanished.

“The truth is I don’t know how I’ll feel sitting there looking at the accused,” she told The Miami

Herald. “It’s one thing looking at them from the other side of the glass in the viewing gallery,” she said. “But it’s another thing sitting in the witness area with them in front of you.”

The accused, mostly former military officials, worked inside the Navy School of Mechanics (ESMA), a training center in the capital that became Argentina’s most notorious clandestine detention camp during the country’s last military dictatorship. The alleged abuses took place from 1976 to 1983.

Some 5,000 people passed through the building during the so-called “Process of National Reorganization,” a military euphemism for ridding the country of Communists and leftist groups.

At the time Ricardo was taken, he was a leftwing militant with the Peronist University Youth (JUP) movement, with links to the Montoneros guerrillas.His death, along with several fellow architecture students from Buenos Aires University — kidnapped the same day — is just one case in a vast trial bringing together 68 defendants implicated in crimes against 789 victims. The trial is expected to last more than two years.

Among the accused are several well-known dictatorship linchpins such as Jorge “The Tiger” Acosta and Alfredo Astiz, known as “The Blond Angel of Death.” Both are already serving life prison sentences after being found guilty in previous tribunals for homicide, torture and kidnapping.

But this court case is unprecedented. For the first time in Argentina, eight men accused of piloting “death flights” over the Rio de la Plata will stand trial. The military favored the flights because they helped ensure that the bodies of victims would never be found. After their capture, victims were often tortured and drugged before being transferred to planes and thrown alive into the murky waters of the river.

Graciela still has little information about her husband’s final moments. She doesn’t know if he was tossed from a plane or killed inside the ESMA, and then burned, in what captors sadistically referred to as a “barbeque.” His remains have never been found.

“State terrorism in Argentina had very particular traits,” explained Hugo Oyarzo, a lawyer working with victims and their families. “We’ve always known about the practice of death flights since the first investigations, but until now the people who piloted the planes had never been included in any case.”

The trial’s most high profile pilot, Julio Poch, was extradited from Spain in 2010. He allegedly confessed to colleagues at the Dutch airline where he worked about his role in the flights. But he has since denied the allegations, saying his words were misunderstood.

Until now, the only person convicted for direct involvement in the flights is Adolfo Scilingo, accused of being aboard a plane in which 30 people died. He was found guilty by a Spanish court in 2005 and sentenced to 640 years. He is now serving his sentence, which was later increased to 1,040 years, in a Spanish prison.

The latest trial is part of an ongoing lawsuit stemming from crimes committed inside the ESMA. The accused include former naval officers, policemen and two civilians.

In October last year, 16 of 18 accused, including Acosta and Astiz, were found guilty of actions linked to the detention center. Their sentences ranged from life to 18 years in prison.

The initial ESMA trial in 2007 featured a sole defendant, Hector Febres, a naval officer. He was found dead in his prison cell days before a decision was due. He apparently took a cyanide tablet.

Human rights trials linked to the dictatorship were reinitiated in 2003 when President Nestor Kirchner came to power. Kirchner, who died of a heart attack in 2010 and was the husband of current President Cristina Fernandez, steered legislation through Congress overturning laws that had pardoned most military officials, except for top officers.

“Today, human rights is a state policy that doesn’t depend on governments,” explained Carolina Varsky from the Buenos Aires Legal and Social Studies Center, a nongovernment organization.

“The president as much as the different political parties in Congress, as well as judges, are all in favor of pushing forward when it comes to judging these crimes.”

For Graciela, many years that have passed and the frailness of the aging accused are immaterial.

While her husband “disappeared” without an arrest warrant and was held without charge, she wants one thing only — justice through correct, legal channels. “The military thought they were exempt from punishment,” she said.