Drugged, dumped by aircraft – but not forgotten

Pilots of ‘death flights’ on trial in Argentina for first time in biggest ever human rights prosecution.

See the PDF
1
1
Almost 30 years since Argentina’s return to democracy, a Buenos Aires courthouse will today hear charges against 68 former officials accused of a multitude of crimes during the country’s “Dirty War”, in which tens of thousands of Argentinians died at the hands of the last military dictatorship.

In what has been called the largest human rights trial in Argentina’s history, the defendants will stand trial for their roles in cases of kidnapping, torture and murder perpetrated between 1976 and 1983, as well as the regime’s notorious “death flights” – the practice of drugging opponents and dropping them from aircraft over the Rio de la Plata and Atlantic Ocean. 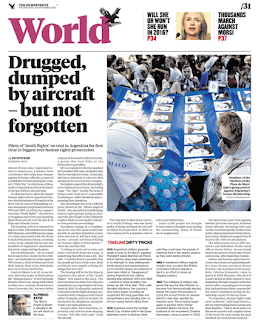 The hearing, which is expected to last two years, will summon more than 800 witnesses, and will focus on a range of crimes associated with the Naval School of Mechanics (Esma), a training centre in the capital that became the deadliest of Argentina’s clandestine detention camps during the junta.The 68 defendants – all ex-armed forces and police except for two civilians – are implicated in crimes against 789 victims, a third of whom survived their ordeals. Most of the defendants have never been tried before.Graciela Palacio Lois, 62, is one witness. She is due to give evidence about the “disappearance” of her husband, Ricardo Omar Lois, along with fellow architecture students from Buenos Aires University. Mr Lois was a leftist militant at Peronist Youth University, a group that had links to the Montoneros guerrillas.

Mr Lois was just 23 when he vanished in November 1976. Mrs Lois knows only that he was taken to Esma. To this day, she has no idea how or where he died and has never recovered his remains.

On trial are some of the dictatorship’s most infamous henchmen, including Jorge “The Tiger” Acosta, the head of Esma’s main “task force” responsible for finding so-called dissidents and organizing their detention.

Also returning to the dock is Alfredo Astiz, known as the “Blond Angel of Death”, who specialised in infiltrating human rights groups using an alias, and who also fought in the Falklands conflict. Both are serving life sentences from previous proceedings.

Ana Maria Careaga, 52, a complainant in the case who spent nearly four months in another detention centre when she was 16, will face Astiz and Acosta – already convicted of killing her human rights activist mother – when she attends the trial.

“Looking at Astiz and Acosta, and other repressors from the Esma, is something that affects me a lot,” she said. “I wonder how it’s possible that the people sat there in the court, flesh and blood, were capable of doing the things that they did.”

The hearing will be the first time in Argentina that pilots of the “death flights” will stand in the dock. The most renowned is Julio Poch, who was extradited to an Argentinian cell from Spain in 2010. He allegedly confessed to his part in death flights during a conversation with colleagues at the Dutch airline Transavia, where he worked. He has denied the allegations, saying his words were misunderstood.

The only pilot to have been convicted is Adolfo Scilingo, who was found guilty of being on board two aircraft in which 30 people died. In 2005, he was sentenced by a Spanish court to 640 years behind bars .

Some 5,000 people are thought to have passed through Esma during the dictatorship, many of whom never reappeared.

The latest trial is part of an ongoing lawsuit. In October last year, 16 former Esma officials, including Astiz and Acosta, were found guilty for their roles in the crimes perpetrated at the detention centre. Sentences ranged from 18 years to life, with two absolutions.

The initial Esma trial in 2007 featured a sole defendant, former naval officer Hector Febres. He was found dead in his prison cell just days before sentencing, after ingesting cyanide.

Justice and human rights have become cornerstones of Argentinian politics since former president Nestor Kirchner, the husband of the incumbent, Cristina Fernandez, came to power in 2003. Kirchner, who died of a heart attack in 2010, helped to steer legislation through Congress in his first year in office, repealing previous laws that had pardoned those responsible for crimes committed during the dictatorship, expect for the top brass.

“In Argentina, human rights trials aren’t symbolic,” said Hugo Oyarzo, a lawyer representing Esma victims and their families. “This is about justice in the most concrete and complete sense of the word: for each victim, for each incident, for each person accused.”